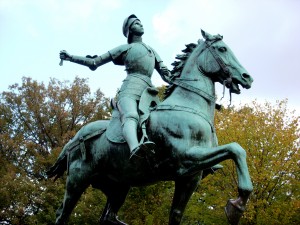 It is one thing to read in Genesis 2:18 and following that God dignifies the woman with the same warrior-description that he only reserves for himself (and a couple of militant nations). It is another thing to see this theme play out in still other portraits of womanhood in the Bible. One telling portrait is that of the so-called “Proverbs 31 Woman.” Traditionally, Proverbs 31:10 and following offers a tender picture of the ultimate homemaker, the profile of the domesticated female, the aspirational, virtuous goal for every woman.

Most women I know loathe the Proverbs 31 Woman.

But what if the tender view often promoted regarding the woman in Proverbs 31 is something very different than what we are generally led to believe? What if there were something much more revolutionary being presented there?

A simple survey of the Old Testament reminds us that there are a small handful of important ballads and poems that bring color to the Old Testament landscape. Examples include Exodus 15:1-21, Judges 5, 2 Samuel 1:17-27, and 2 Samuel 22. Take some time when you can and read through those captivating passages. Their design and tone reflects what are commonly understood as military/hero poems; accounts celebrating specific heroes or feats. I wish to strongly submit that Proverbs 31:10-31 fits well within the parameters of such a literary device.

The very first verse of the passage gives us a remarkable clue. Common translations speak of an excellent wife or a wife of noble character or a virtuous wife. These are by no means inappropriate translations, and we must keep that in mind. But I do think they tend to be biased translations, defaulting away from bold, masculine colors toward more stereotypical female, pastel colors. Let me explain.

The English word “excellent” or “virtuous” is the Hebrew word chayil. This word, used to describe the woman in the passage, is a masculine noun. Moreover, of the 243 times it is used in the Old Testament, only five are ever used with regard to a woman (Ruth 3:1, 4:11; Proverbs 12:4, 31:10, and 31:29). The other 238 times it is employed it refers either to men of valor, valiant armies, or, generally, men of great nobility (think “knights”). When the word is used in those contexts it is often translated into the English with words about valor, might, strength, and so forth. In its most common form it evokes notions of military might and a warrior’s strength, making it a fitting echo of the ezer-warrior we observe in Genesis 2:18 and 20.

Talk about recasting the whole tone of Proverbs 31:10 and following. Now the mild-mannered woman of virtue is presented as a solider, a warrior, a woman of valor. Think Joan of Arc! In her challenging book Half the Church, Carolyn Custis James offers this clearer glimpse of the Proverbs 31 Woman:

Truly, she is a woman to be reckoned with, as are all of God’s daughters.

Woman . . . what does the ballad of your life reveal?

“Write This Down” is a summary of select teaching moments offered by Pastor Matthew. The preceding summary is from the message “To Be Reckoned With,” the second message from a brief series entitled “Warrior: A Study of Biblical Womanhood,” presented on the weekend of August 11, 2013, at Bethel Church.