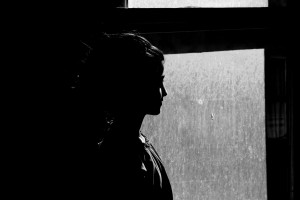 I personally perceive that one of the greatest fears of a woman is that she might be invisible, hidden, or be found having no inherent beauty. I cannot help but think of the bleeding woman in Luke 8:43 and following, whose diseased body caused her to hemorrhage for twelve years. She had exhausted every possible option for remedying her situation, yet nothing sufficed. Ostracized, alone and no doubt scared, she tried one last thing. When Jesus walked by her while she was hidden in a crowd of people she reached out and touched his garment, believing that perhaps by so doing she could receive from him some measure of healing.

It worked! And when Jesus turned to identify her a most important detail came out regarding how she perceived herself. Luke 8:47 says, “And when the woman saw that she was not hidden, she came trembling, and falling down before him declared in the presence of all the people why she had touched him. . . .”

But it was not meant to be that way. Consider God’s perspective as declared in Genesis 1:26-27:

Then God said, “Let us make man in our image, after our likeness. And let them have dominion over the fish of the sea and over the birds of the heavens and over the livestock and over all the earth and over every creeping thing that creeps on the earth.”
So God created man in his own image,
in the image of God he created him;
male and female he created them.

Note the inclusion of the one two-syllable word in the middle of the final line: female. When God offered up his grand vision for humanity, that people be made as his image-bearers, having dominion over all the created elements, he did not restrict such joy and privilege to males. Women were right there in the midst of it all, shattering the cultural expectations and superficial thinking of generations who would otherwise relegate women to the realm of the unseen. Carolyn Custis James, in her penetrating book Half the Church, writes:

“Page one of the Bible shatters every negative value statement the world has ever made about women by offering up the most exalted view of women anyone could imagine. God’s story begins by emphatically corroborating the view that ‘women hold up half the sky,’ but takes this statement much, much further when God names women, along with men, as his image bearers.”

Image bearers are God’s special representatives on Earth, his emissaries expressing and reflecting his person. What then does it mean for the male and female to bear God’s image? Four things come to my mind. First, the male and female, as image bearers, embody community. They share in a horizontal relationship that is designed to amplify each other’s dignity, and together they share in a vertical relationship with the Triune God who is himself the perfect embodiment of community. Secondly, as image bearers, the male and female embody capacities that set them apart from all other created things. They enjoy the select attributes of God, such as the ability to communicate, reason, empathize, direct, employ wisdom, embrace morality, and so forth. Thirdly, as image bearers they have the privilege of creating still other image bearers. Only through a man and a woman may still more image bearers come. Lastly, image bearers are responsible for applying authoritative control over the created elements. They are to have dominion, to insert themselves into the role of governing all of the created order, ensuring that God’s best is celebrated, thus assuring that honor and justice and goodness are amplified in an otherwise broken and disorderly world.

The unique call to bear God’s image is a hugely important responsibility, one that is for both the man and the woman. It is a shared responsibility. The man is not called forward while the woman remains in the background. Both are endowed with imago dei, and both must step up and embrace this unique call. Men and women have exactly the same identity (image bearers), and, therefore, exactly the same dignity.

And this truth annihilates every perception that women should remain unseen.

“Write This Down” is a summary of select teaching moments offered by Pastor Matthew. The preceding summary is from the message “Created in God’s Image,” the third message from a brief series entitled “Warrior: A Study of Biblical Womanhood,” presented on the weekend of August 18, 2013, at Bethel Church.