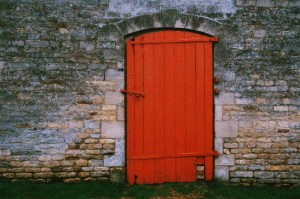 Jesus’ movement from the synogogue to Peter’s home is far more significant than might seem on the surface. Consider the text, according to the English Standard Version, from Mark 1:29-34:

And immediately he left the synagogue and entered the house of Simon and Andrew, with James and John. Now Simon’s mother-in-law lay ill with a fever, and immediately they told him about her. And he came and took her by the hand and lifted her up, and the fever left her, and she began to serve them.

That evening at sundown they brought to him all who were sick or oppressed by demons. And the whole city was gathered together at the door. And he healed many who were sick with various diseases, and cast out many demons. And he would not permit the demons to speak, because they knew him.

Besides the presence of the “urgent mission” note (“immediately”) common throughout so much of Mark’s gospel narrative, we note the profoundly personal, even intimate nature of the account. A handful of observations merit review, with some subsequent takeaways worthy of consideration. Let’s begin with the observations.

First, it is no small matter that Jesus is leaving the synogogue (cp. Mark 1:21-28) and entering into Peter’s abode. Within this movement is the affirmation that things of profound spiritual magnitude can unfold well beyond the confines of the religious establishment. That is not to dismiss whatsoever the important events within the synogogue or similar locales; rather, it is to celebrate that beyond these God works mightily. Jesus utterly destorys the notion that the so-called “sacred” places (think “church,” etc.) are somehow better than the so-called “secular” or “domestic.” He simply refuses to be bound by such categories, and neither should we.

A second observation is related to the first. Jesus is determined to move right into one’s personal, indeed, intimate, world. It is not enough for Jesus to merely engage Peter in the public sphere of Capernaum’s fishing community (cp. Mark 1:16-18), or within the synogogue (cp. Mark 1:21), as if God only cares about external matters. Jesus is determined to connect with Peter and those around him by being in their most personal spaces, in his home, with his family, among his neighbors, and so forth.

Thirdly, community remains exceedingly important to Jesus. Andrew, James, John, Peter, Peter’s mother-in-law, the implication that Peter’s wife is around, and then later an large number of individuals from the village—Jesus offers perfect focus on one and many at the same time, and relishes doing so.

A fourth observation finds Jesus willing to push past not just the compartmentalized world of the sacred and domestic, but the cultural barrier between men and women, clergy and laity, well and sick, and so forth. It is essential that we note the tenderness and availability with which Jesus approached Peter’s ill mother-in-law. Indeed, we must not missed that he touched her (Mark 1:31). Such a thing is unheard of. Spiritual leaders of that era were men who worked to distance themselves from women. Moreover, they avoided the infirm as well as the widow. Peter’s mother-in-law embodied all these things and yet Jesus reached out his hand to her and lifted her to renewed health. Were this public this would have been scandalous.

More observations could be shared. For instance, one could highlight that the villagers waited until after the Sabbath (cp. Mark 1:21) had ended (see Mark 1:32) before heading out with their ill or demonized loved ones to see Jesus. Or, one could discuss the fact that there is a clear distinction between physical illness and demonization. While these may overlap, it is not a necessary that they do. Yet at this point, attention to some takeaways may prove fruitful. They are as follows.

While important things do take place at Bethel Church’s campus, perhaps the greatest ministry moments take place far beyond our property, in our homes and places of work. Parents spending time with their children, friends gathered in their Growth Groups, employees demonstrating remarkable integrity in their workplaces, students studying together at Caribou Coffee, and so forth, are examples of where real life-transformation can take place, most likely in a far more powerful manner than “at church.” The need is not to diminish the work of God within the confines of any given church property, but to celebrate the work of God far beyond.

One of the things Jesus was a master at was elevating the dignity of women. Pushing right past the cultural and religous conventions of his day, Jesus gave safe, personal attention to women and offered them a place that no one ever had before.

But not only did he dignify women, the Lord Jesus dignified the common person in general. In this sense he has dignified all of us. His movement away from the religious establishment into the personal and mundane realm of Everyman reminds us that the Great God is passionate about meeting us right where he finds us, regardless of how messy or crude that is. His love knows no bounds, and his ability to transform our lives infinite in scope.

“Write This Down” is a summary of select teaching moments offered by Pastor Matthew. The preceding summary is from the message “The Entrance,” the seventh message from the series entitled “Jesus, God’s Beloved Son,” a study through the Gospel of Mark, presented on the weekend of January 20, 2013, at Bethel Church.