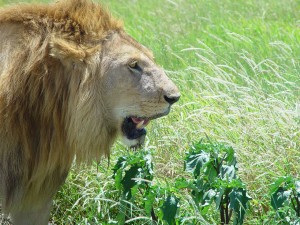 One of the primary features of the Gospel of Mark is the reality that beyond the scope of time and space there is a spiritual realm that is very real and very active. Indeed, one can make the case that before the public truly acknowledged Jesus as unique, forces from the realm beyond time and space affirmed his mission and person. In Mark 1:9-11 one finds a “voice . . . from heaven” declaring Jesus to be the “beloved Son” of God, and in Mark 1:21-28 one finds demonic beings claiming that Jesus is the “Holy One of God”.

That there is a real and active world beyond what is seen by the eye of man is very important. In the year 67 AD, when the persecuted Christians were coming to Mark, their pastor in the city of Rome, asking if in light of the brutal oppression following Christ was still worthwhile, it appears vital to Mark to suggest that what happens here within time and space is merely an echo of what is taking place in the spiritual realm. The great contest between the forces of darkness and the forces of light, between Satan and God, spills into time and space as we know it.

Whereas Mark 1:13 reminds us that Satan is alive and real and that he had his sights set on the Lord Jesus, Mark 1:21 and following highlight the reality that Satan’s minions may be found anywhere, working diligently to push against God’s purposes and plan. Consider the passage from the English Standard Version:

And they went into Capernaum, and immediately on the Sabbath he entered the synagogue and was teaching. And they were astonished at his teaching, for he taught them as one who had authority, and not as the scribes. And immediately there was in their synagogue a man with an unclean spirit. And he cried out, “What have you to do with us, Jesus of Nazareth? Have you come to destroy us? I know who you are—the Holy One of God.” But Jesus rebuked him, saying, “Be silent, and come out of him!” And the unclean spirit, convulsing him and crying out with a loud voice, came out of him. And they were all amazed, so that they questioned among themselves, saying, “What is this? A new teaching with authority! He commands even the unclean spirits, and they obey him.” And at once his fame spread everywhere throughout all the surrounding region of Galilee. (Mark 1:21-28)

There are some observations that merit highlighting. First, we cannot easily dismiss the fact that there is clash between the material world and the spiritual world, and this clash can be violent. That the demons has taken up residence in this particular man who found himself in the synogogue reminds us that forces from beyond time and space can indeed invade time and space and wreak havoc. That Jesus had the capacity and authority to confront such an invasion, and this seen by the material public, affirms still more the manner in which the contest spills into the material domain.

Secondly, combatting unclean forces requires an authoirty that is higher than anything man or religion can provide. To deal with forces from the spiritual realm one needs authority from the spiritual realm. Jesus is the manifestation of the greatest and purest authority, the authority most capable of dealing with what is, as Mark recounts it, “unclean.” In and of themselves, men do not have this authority, and if they are to have it, it must come directly from the Lord Jesus (see Mark 3:15).

Thirdly, the religious establishment does not negate demonic influence. Indeed, the religious establishment might even mask the reality of it. It cannot be overlooked that right in the middle of the synogogue was at least one man being demonized. One cannot help but wonder how long this man had been a participant at the synogogue. Were there others? That the demonized man uses a word like “us” suggests that either this one man had many demons within him or that there were others in the worship center likewise being demonized. The idea of religion, or the material features of religion (a physical locale such as a church, etc.) does not necessarily mitigate dark forces. Something greater is required.

Fourthly, the demons seem to be reacting to Jesus’ authority as manifested in his teaching, and, probably, his very presence and person. This not only affirms something about the unique reality of Jesus himself, but is a commentary on what had been lacking for some period of time within the religious environment of the community. The people who observe these things are “amazed” by Jesus; they have never experienced anything quite like his authority. One cannot help but note that forces of darkness are threatened by Truth, by righteousness, by any effort to invade the territory that the dark forces claim is theirs. Jesus himself speaks to this dynamic in Mark 3:22-27 when he talks about one who will “enter a strongman’s house and plunder his goods” (Mark 3:27). To take over the home, so to speak, the “strong man” must first be bound up. To unveil his kingdom among men, Jesus must bind up the strong man (Satan). This will naturally bring a reaction, thus amplifying the warfare between forces of light and darkness.

Mark’s mentor Peter spoke into this reality, making it clear that we followers of Christ truly participate in the fight. First Peter 5:6 and following are worthy of our attention:

Humble yourselves, therefore, under the mighty hand of God so that at the proper time he may exalt you, casting all your anxieties on him, because he cares for you. Be sober-minded; be watchful. Your adversary the devil prowls around like a roaring lion, seeking someone to devour. Resist him, firm in your faith, knowing that the same kinds of suffering are being experienced by your brotherhood throughout the world. And after you have suffered a little while, the God of all grace, who has called you to his eternal glory in Christ, will himself restore, confirm, strengthen, and establish you. To him be the dominion forever and ever. Amen. (1 Peter 5:6-11 ESV)

Herein we see the necessity of a humble life that affirms the might and care of God. We are to lay all of our fears before Him. We are to be watchful and diligent, keenly aware of Satan our adversary. We must, as Peter orders, “resist him, firm in [our] faith.” The ability to stand against him (“resist”) is tied directly to remaining steadfast in our “faith” in God Almighty. We must remember, as Peter suggests, that we are not alone in the fight, and that ultimately God will ensure his dominion overcomes all forever.

“Write This Down” is a summary of select teaching moments offered by Pastor Matthew. The preceding summary is from the message “A Call to Fight,” the final message from the series entitled “Church on the Edge,” a study through the Gospel of Mark, presented on the weekend of October 28, 2012, at Bethel Church.