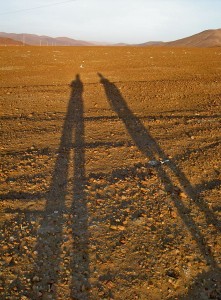 The wilderness is a place of desolation, deprivation and despair. Here the harsh voices within our souls scream bloody murder, taunting us, pointing out our foolishness, our shame, our sins, questioning who we really are and why we are so lonely. The vulnerability of the wilderness plays on our deepest fears and leaves us wallowing in profound self-doubt. It is within the wilderness that we crawl in circles, desperately attempting to find an oasis against the scorching heat, a shadow in which to rest, a cool pool from which to drink. But to no avail.

And we all have wilderness moments, sometimes too often, sometimes, for some, perpetually.

The people of Israel felt this deeply. It had been nearly 400 years since they had last received any authoritative, prophetic word. Their leaders had succombed to complacency and superficiality. Their people had settled for a survivalist mentality that offered no real hope. Their pride had been vaquished by dominating nations like Persia and Greece and then Rome.

In a word, the people of Israel had come to believe God had forgotten them.

The beginning of the gospel of Jesus Christ, the Son of God.
As it is written in Isaiah the prophet,
“Behold, I send my messenger before your face,
who will prepare your way,
the voice of one crying in the wilderness:
‘Prepare the way of the Lord,
make his paths straight,’”

After centuries the silence was broken with the solitary proclamation of a most unusual messenger named John, whose declaration would announce to the people of Israel, and, by extension, a waiting world, that God was on the move and a Savior had come. “Prepare the way of the Lord,” John cried out. And had we been there we might have been tempted to say, “It’s about time!”

Embedded within Mark’s prologue to his historical narrative are some important reflections about God meeting us in the wilderness. First, this Jesus who John introduces us to is both fully man and fully God. This is absolutely important. “Jesus Christ” is a man’s name. Other gospel accounts tell of his birth and early life. That he is a man is vital because he is therefore earthy and tangible and symathetic to the travails of humanity. But he is also “the Son of God.” That means he therefore shares completely the essence of total deity, fully God, albeit subordinated, if you will, to the Father. The beauty of this is that God has come, but in terms we could fathom, to meet us in the wilderness.

Secondly, the hopeful arrival of this God-Man is the fulfillment of a promise going back millenia, and rooted in the aspirations of the ancients. The quotation from Isaiah referenced in Mark 1:2-3 is actually a compilation from Exodus 23:20, Malachi 3:1, and Isaiah 40:3. This compilation spans both the Law of the Hebrews as well as the Prophets, sweeping sections of the ancient Scriptures that testify to God’s handiwork in days past and in the days to come. The testimony of the Bible, stretching back throughout the ages past, is that God will not forget his promise to bring light to the darkness and quench the thirst of the weary soul. He will meet us in the wilderness.

Thirdly, God will not only prepare us for the realization of hope, but he will actually help us realize hope. John was called the “Baptizer” because he rallied those would avail themselves to his message to be baptized as a sign of repentance and readiness for something new for their lives. Mark 1:8 tells us that John baptized with water but that Jesus Christ would go further, baptizing those who are willing with God himself, the Holy Spirit. When God meets us in the wilderness it is not half-done or merely a teasing statement. It is a radical transformation; preparation has taken place, and the thing for which we have been prepared comes about—God’s presence permeating our very existence.

Within these reflections is an invitation for you and me. It is to repent of our sin and brokenness and take hold of Jesus Christ. For some of us who are exploring the options for soul-satisfaction, this is a new word, one that transforms our lives and gives us hope in the desert. For those of us who have long walked with Christ, but have wandered into a desert place because of inattention or rebellion, this is a precious reminder of whose we really are.

Let’s turn to him.

Psalm 68:4 offers a powerful glimpse of the kind of God who pursues us out of love. Sing to God, sing praises to his name; lift up a song to him who rides through the deserts; his name is the LORD; exult before him! I love the fact that our God does not ride around our deserts. He does not avoid these wilderness places. The psalmist declares that our God goes “through” the deserts.

With us. Every step of the way.

“Write This Down” is a summary of select teaching moments offered by Pastor Matthew. The preceding summary is from the message “A Cry in the Wilderness,” the first message from the series entitled “Jesus, God’s Beloved Son,” a study through the Gospel of Mark, presented on the weekend of November 4, 2012, at Bethel Church.