“Write This Down…” provides a restatement of selected points or observations from various teaching venues at which Pastor Matthew speaks. The following material is from Pastor Matthew’s sermon entitled, “The Terrible Price of Fellowship”, part of the sermon series “Memoirs of an Ancient Prophet: A Study of the Book of Daniel,” presented the weekend of February 20, 2011, at Bethel Church:

Daniel 6:1 and following find the prophet Daniel living life within a brand new kind of normalcy. The Babylonian kingdom in which he has lived for over sixty years is gone. The new kingdom—the Medo-Persian Empire—now dominates the sands of the Ancient Near East, and with the establishment of this empire is a whole new level of political intrigue and jealously with which Daniel must deal, particularly since the newly established King Darius wishes to elevate Daniel to the second most powerful position in the empire (cp. Daniel 6:3).

Reacting negatively to this plan are scores of high-ranking officials that fill out the governmental roster. Thus it is these leaders rush to destroy Daniel, contriving a plan in which to trap Daniel as a law-breaker, making it necessary for him to be punished by being fed to Darius’ lions. Convincing King Darius to sign a decree that only he should be worshiped for a thirty-day period, these officials have finally figured out a way to undermine Daniel. They know that Daniel would never worship anyone or anything other than his God (cp. Daniel 6:5)

Of course, the plan works. King Darius signs the law and almost immediately the scheming officials rush to Daniel’s house and catch him praying to the One True God (cp. Daniel 6:11). Taking hold of Daniel they bring him before King Darius, and the king, realizing he has been duped by the officials, is forced to abide by the very law he created—Daniel is ordered into the lions’ den.

Most Bible students know the rest of the story. Daniel survives the ordeal because “an angel . . . shut the lions’ mouths” and they did not harm him (Daniel 6:22). The king, thrilled to find Daniel alive, then orders the scheming officials and their families to be fed to the lions. The text tells us that “before they reached the bottom of the den, the lions overpowered them” (Daniel 6:24) and destroyed them. But the primary lessons are to be seen in Daniel’s life. Daniel 6:10 unpacks these well. Consider the following. 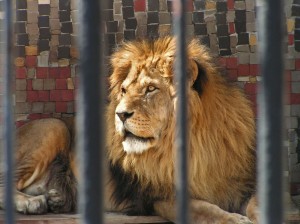 Daniel Was a Man of the Word. Daniel 6:10 tells us that Daniel prayed facing Jerusalem. This would suggest that he was a man sensitive to and knowledgeable of the Scriptures. After all, it was the ancient Israelite King Solomon, who lived nearly four hundred years earlier, who, anticipating the exile of the Israelites, suggested that the Israelite people should pray in repentance toward the city of Jerusalem (cp. 1 Kings 8:46-53). Daniel appeared to know this well, and used this as a model for how he approached God. And the fact that he did this three times a day seems to echo passages like Psalm 55:17, wherein King David pens that he prays “evening and morning and at noon.” Interestingly, Psalm 55 is a psalm about betrayal and opposition, the very things Daniel was faced with in King Darius’ court. One wonders if this very psalm was on his mind when the schemers rushed into Daniel’s house.

Daniel Understand Prayer and Praise. Daniel 6:10 makes it clear that Daniel humbly talked with his God, praying and giving thanks to him. Perhaps the pleas for repentance found in 1 Kings 8:46 and following were the very things that Daniel offered. And the fact that in the face of such opposition Daniel willingly “gave thanks” to God is a telling detail about Daniel’s contrite spirit.

Daniel Knew His Purpose. Daniel 6:21 reveals that Daniel understood his purpose in life was to show love to God and man, even a pagan king like Darius. This is echoed in those words he gives to King Darius, when he says, “I was found blameless before [God]; and also before you, O king . . .” (Daniel 6:21). What a tremendous picture of Daniel’s heart, and a hint toward the greatest commandments that Jesus himself offers centuries later when he says that his disciples must love the Lord God with everything and love neighbors as themselves (cp. Matthew 22:34-40).

One thing to note, however, about Daniel’s life, and the way in which it helped him endure hardship, is that it was costly for him. Daniel was a lonely man, hated by many, demeaned often (cp. “one of the exiles” in Daniel 6:13), and nearly killed for his faith. The reality is that the price of fellowship with God can be high. And with the days getting darker, as will be seen when attention is given to Daniel 7 and following, we had better be prepared to count the cost.