“Write This Down…” provides a restatement of selected points or observations from various teaching venues at which Pastor Matthew speaks. The following material is from Pastor Matthew’s sermon entitled, “Don’t Linger When God Points the Finger”, part of the sermon series “Memoirs of an Ancient Prophet: A Study of the Book of Daniel,” presented the weekend of February 13, 2011, at Bethel Church:

Daniel 5:1 and following provides a fascinating glimpse at one of the Bible’s most arrogant men, King Belshazzar, and the way in which this man met his demise. The implications for this man’s demise are huge, both personally and prophetically. Consider the following.

Belshazzar’s great feast, as recorded in the chapter, came as the Medo-Persian armies were laying siege to the city of Babylon. Convinced he had enough supplies for twenty years, and that the city’s walls were insurmountable, Belshazzar hosts a party in part to thumb his nose at the Medo-Persians, and in part to rally his people to have confidence in their own supposed might. So convinced were they of the power of their idols to deliver them, Belshazzar ordered that the golden vessels his predecessor King Nebuchadnezzar had swiped from Jerusalem’s temple in 586 BC be brought in. “In the same way our gods defeated the Hebrew gods back then, so they will defeat the Medo-Persians today,” is surely what Belshazzar had in his mind (cp. Daniel 5:2-4).

But then came the famous handwriting on the wall, and the great hand that wrote it. Daniel 5:6 tells us that Belshazzar was absolutely terrified, and being perplexed he called in his royal advisers (Daniel 5:7) who proved utterly helpless. Ultimately, Daniel himself was brought in, now in his eighties, retired it appears from his years of royal service. He, of course, provided answers.

And provide he does. Foregoing the normal courtesies afforded the ruling monarch (contrast Daniel 5:10), Daniel launches right into Belshazzar, and begins to unfold for him a handful of important nuggets of truth. The first nugget pointed out that Belshazzar was not Nebuchadnezzar. Nebuchadnezzar had humbled himself before God—a cruel tyrant who ultimately repented of his wickedness and cried out to the Most High for mercy. “And you his son, Belshazzar, have not humbled your heart, though you knew all of this” (Daniel 5:22), Daniel declares. 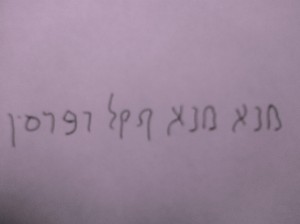 Another nugget is the handwriting itself. The information recorded in Daniel 5:24-28 makes it clear that God has had enough of Belshazzar’s bluster, with mene mene tekel uparsin essentially meaning, “You have been scrutinized, scrutinized again, you are found to be empty, and are now divided.” These monetary terms also reinforce in their own way the idea that Belshazzar’s arrogance is going to cost him dearly.

And then there is the little matter of the Persian army. That last word in the handwriting, uparsin, finds within its root, peres, an allusion to the Persians, and sure enough the very night that Belshazzar has his great feast, October 12, 539 BC, the Medo-Persian armies sneak into Babylon, take it over, and, as Daniel 5:30 suggests, kill Belshazzar.

Prophetically none of this should have been a surprise. Not only did Daniel himself inform the great King Nebuchadnezzar decades earlier that his kingdom would give way to a kingdom that was at once divided but also united (see Daniel 2:32), but about one hundred years earlier the prophet Jeremiah let God’s displeasure with Babylon be known, as well as his intention to use the Medo-Persian Empire to bring about “the vengeance of the LORD” (Jeremiah 51:11. See also Jeremiah 51:24). And in the same way that God humbled this Gentile nation because of the way in which it demeaned the people of Israel and mocked Israel’s God, so will God humble the Gentile nations in the future during the Tribulation era to come. But we’ll get into that more in the weeks ahead.

Personally, it seems appropriate to ask myself if humility or haughtiness defines me. Just as Belshazzar had no excuses for his arrogance, for he had seen firsthand the power of a transformed life (cp. Daniel 5:22), so I have no excuses. The evidence of God’s saving work through Jesus Christ are all around me. The question really becomes: Do I let Jesus Christ change me?