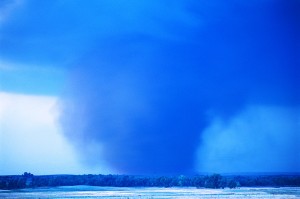 Perhaps it’s because I have a little girl of my own and I can appreciate the enthusiasm with which she would enjoy such a simple treasure. I can envision the playful wonder in her eyes and hear her offer up those captivating words, “Daddy, look!” Regardless, when the little package of pony tail bands entered my hand the world seemed to pause so tears would be allowed to pour over my eyelids.

The night before scores of people had been displaced from their homes. Over ten thousand residences were damaged or destroyed. Nine hundred people were injured. At last count, forty-three people were dead. Like that dark spring day in 1995 when Oklahoma City’s federal building was leveled, May 3, 1999, had turned into a day the rugged citizens of the Sooner State would never forget. And just like those days following the bombing, Oklahomans came in droves to help the tornado victims through the despair that had come hurling down from the boiling spring sky.

It had been less than twelve hours since those terrible twisters wrecked havoc on central Oklahoma. Now, tractor-trailers were parked on street corners and in parking lots all across the state. Huddled near the openings of these cavernous mobile warehouses were numerous people loading everything from dog food to diapers—all to be immediately placed into the frightened hands of the tornado victims. Everything one could imagine could be found. Hygienic products, canned foods, all variety of clothing items, sleeping bags, toys, paper products, tools, batteries, flashlights—the overwhelming assortment of relief supplies just kept streaming right into the back of these metal rigs. And it was in the midst of this effort that the diminutive hand of a black-haired little girl reached up and placed into mine the cellophane wrapped package of pony tail bands.

Two of the bands were red (those are the ones my little girl would like the best). A couple were blue. And the remaining bands included purple, green and white. As I looked up from the tiny package and into the bright eyes of the little girl standing below me, I could see an expectancy that I was lacking as the blustery day wore on—a sparkle that is best seen in the face of a youngster.

To put it simply, I saw hope.

You see, eventually the cans of tuna and lima beans would run out, only to be replaced by still more and perhaps better food. At some point the donated clothes would be exchanged for those which were new and fit better and were more stylish. In short order the victims of the tornado-ravaged communities would leave the cots found at the local churches and schools and businesses, only to settle into housing that would be little more than the next step toward new homes.

Consider the delight! Think of the days of enjoyment. Envision the bright and happy eyes of a heartbroken little girl longing for something to call her own, especially when everything that had once seemed so safe and secure was no where to be found.

It is here that I am drawn to those cheery words King David penned in his more youthful days:

For in the day of trouble he will keep me safe in his dwelling;he will hide me in the shelter of his tabernacle and set me high upon a rock. Then my head will be exalted. (Psalm 27:5-6)

Did you see the message of this shepherd-turned-king? There will be days of trouble. David acknowledges this simple reality. Whether it is the loss of a job, the hurtful words of an acquaintance, the death of a spouse or the descent and destruction of a springtime storm, trouble comes.

But when we entrust ourselves to our God He will deliver us. Though earthly dwellings give way, His doesn’t move. When we hide ourselves in Him we are utterly secure. Take note of David’s confidence: He will keep me safe. Whatever the circumstance, it will never be bigger than God. And it will never be larger than His ability to take the very best care of your soul.

And what is the result?

We are exalted. Our God lifts up our heads like a misty-eyed daddy tenderly raising the soft chin of a heartbroken girl. He helps us look up and beyond the circumstances. He gives us hope beyond our despair.

The hope continues as God carries us onward, safe and assured. And because it is so, we may too laugh and giggle like some wide-eyed little girl ripping gleefully into a cellophane wrapped package of brand new pony tail bands.