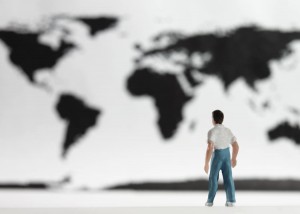 As Jesus’ disciples made their way up the eastern slope of Mt. Zion toward the magnificent temple mount, they must have felt a sense of exhilaration about approaching that familiar but still great place. It was, after all, the symbol of everything Jewish—that monument that evoked remembrances of the covenant God and His glory.

But Jesus was not expressing the disciples’ anticipation. Having surveyed the scenery the prior night, Jesus was overcome with a distress that carved a determined pose across His weathered face. He knew what the others had forgotten—the Temple of Israel was to be a beacon for all the nations. However, through the selfish leadership of Israel’s religious prudes, that glorious edifice had become like a wick snuffed out—dark and cold.

It is with that in mind that the Lord of Glory walked into His Temple and began dismantling the seller’s tables. Doves were flying everywhere while sheep and goats began scrambling across the vast, crowded courtyards. Shekels were being tossed about and salesman and supervisors were frantically trying to reign in their wares. Some likely concluded that Jesus disdained the marketplace nestled in the outer courts of this grand worship center. It no doubt was out of hand, but it seems reasonable to expect that Jesus had a greater concern. After all, journeying Jews had to buy their sacrifices somewhere.

No—the greater issue was that the marketplace was located right in the heart of that area where the nations were supposed to gather. The Court of Gentiles had become a precinct of purchasers and products. Because of this, the non-Jewish person had almost no access to the Temple. The place that Jesus referred to as a “house of prayer for all nations” (Mark 11:17) was now structured to thwart the would-be God-fearer. The gathering spot for those the LORD referred to in Isaiah as the “foreigners” (Isaiah 56:6) was supposed to be a free place of worship and honor and sacrifice for all peoples before the Holy God, not a Middle Eastern bazaar gone wild.

The reason? God is the Missionary God. He has a heart of compassion for all peoples. The whole reason He raised up Israel as His beloved was so they would represent Him to a broken world. Imagine—broken but redeemed people representing God to a broken and needy world. That design could only come from somewhere else—or Someone.

What is your realm? And what are doing there? You know, as the clock continues its woeful tick toward the End of Days, we must shed any lingering marketplace mentality and open ourselves up to being individual courtyards for the nations, whereby many may behold within us the Eternal God.