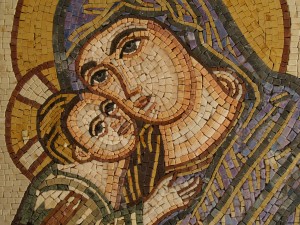 According to Mark 3:20-21, Jesus’ family was desperate to find Jesus with the hopes of getting him to temper his efforts; it might appear that his popularity was beginning to take a toll on them. “He’s crazy,” was their conclusion. Verse 31 picks this theme back up, with Mary and her sons, and perhaps her daughters, having found Jesus. Read it carefully:

A couple of things should be noted. First, the most important character not mentioned in the passage is the Father of Heaven and Earth. And yet it is Jesus’ allegiance to his Heavenly Father that defines the entire passage. Luke 2:41-51 reminds us that Jesus had long before drawn a line between even his precious earthly family and the relationship that he has with his Heavenly Father. “Did you not know that I must be in my Father’s house,” was his response in Luke 2:49 to Mary and Joseph’s urgent concerns for his whereabouts. His allegiance there took precedence over everything. Period.

That did not mean he was to be dismissive of his family. Indeed, Luke 2:51 makes it clear he remained honorable with his parents, and his commitment to human relations allowed him the privilege of growing in stature with those around him. This is an important point for the person who, like the Pharisees (see Mark 7:9-13) would use religion as a tool for avoiding family responsibilities.

The other thing to be noted is that Jesus singles Mary out in his comments in Mark 3. The English “Who are my mother and my brothers,” is better translated “Who is my mother and my brothers,” narrowing down the focus on Mary. It is as if Jesus wants his mother to wrestle with her memory, the account from the past, when the angel Gabriel had approached her to inform her of the miraculous conception of the Christ-child, when the shepherds came to declare her child was savior to the world, and wise men had come to worship him. Were Mary to have really paused to remember would have helped her embrace Jesus’ greater commitment to his Father’s business, and would have encouraged her to likewise give her allegiance chief of all—even over and above family—to the very same Father. This would be the essence of “doing God’s will” (Mark 3:35), which is in fact the defining feature of a disciple of Jesus. When we do God’s will, that is, when we identify exclusively with the Father as the defining factor in our lives, then we enter into his family, embrace his economy, celebrate heavenly structures, and we do so in such a way as to make even the best earthly families and structures secondary.

Secondly, allegiance to our Heavenly Father motivates us to influence and love our families—even the difficult ones—very well.

Thirdly, allegiance to our Heavenly Father is costly. People will scorn us, mock us, undermine us, and otherwise dismiss us. Obedience costs something.

Lastly, if we are among those who are mistreated or maligned by family because we follow Christ, then we need to take heart. God will right the wrongs, make up for our loss and heal our pain. As an exclamation point to this read Mark 10:29-31:

Jesus said, “Truly, I say to you, there is no one who has left house or brothers or sisters or mother or father or children or lands, for my sake and for the gospel, who will not receive a hundredfold now in this time, houses and brothers and sisters and mothers and children and lands, with persecutions, and in the age to come eternal life. But many who are first will be last, and the last first.”

“Write This Down” is a summary of select teaching moments offered by Pastor Matthew. The preceding summary is from the message “A New Family”, the eighteenth and final message from the series entitled “Jesus, God’s Beloved Son,” a study through the Gospel of Mark, presented on the weekend of May 19, 2013, at Bethel Church.