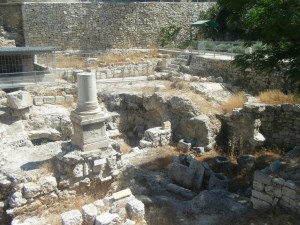 A dark night has come and gone since the horrid massacre at Sandy Hook Elementary. My own numbness continues, as I am sure does yours. I cannot help but note the weird irony that yesterday morning, early, I posted on my Facebook page how overwhelmed I am that my own precious girls are no longer little sprites with whom I snuggle watching Blues Clues and Dora the Explorer. They head out on their own every morning now, with Emily driving, bravely tackling the world. Perhaps some of the kids killed yesterday morning in Connecticut had just snuggled their own parents hours before. Perhaps some of those parents glimpsed into the future at the day their young ones would be, like mine, driving around and managing a busy social schedule.

As I was praying about all of these things this morning the Lord brought to my mind a moment of intense questioning between Jesus and some people in a concerned crowd. Tragedy was on the mind of the crowd. Why bad things happen to seemingly good and innocent people dominated the tone of those gathered. Consider the passage from Luke 13:1-5:

I am so grateful that Jesus took the questions. He could have dismissed them, but that would not have been his character. They were serious questions from hurting and concerned townspeople. Embedded within the questions was a hunger for justice as well as understanding. “Did these victims do something wrong?” might be laced within the words. “Why do such things happen?” was certainly part of the equation. To the first implied question about whether these folks had done something wrong, Jesus states clearly, “No.” To the second implied question about why these things happen, Jesus essentially passes and redirects the thinking of everyone involved in the conversation. Perhaps he understood that any answer to “Why?” will simply never be satisfactory.

Truly it never would be satisfactory. One could point to Jesus’ helpful words from John 16:33 when Jesus tells his listeners that “In the world you will have tribulation.” The fact is God never promised an easy and simple life. He was bold enough and honest enough to tell us that this world would be tough. The implication is that it will be painful and we will have questions and confusion and hardship and loss. Again, one could certainly point to such statements from our Lord, amplifying these as truisms in the face of tragedy.

But how could that satisfy the heart of a parent who has just lost her only child in a massacre?

What Jesus did do when responding to the crowd in Luke 13 was redirect them to a completely different line of thinking. “Unless you repent,” he offers, “you will all likewise perish.” And with those words Jesus effectually declares that in the face of life’s greatest and most painful dilemmas the best course of action is to turn to God because life is fragile and we just never know when the clock of our earthly lives will cease its ticking.

We need to be ready. The eighteen people who died when the Tower of Siloam fell upon them likely did not anticipate that such a thing would happen. The families that were killed by Pilate’s stormtroopers were also probably not expecting to die. Certainly the people in Newtown, Connecticut, were not anticipating such a nightmare would unfold on an otherwise mundane Friday in December. With such realities, however, ever-present and ever-pending, the only true recourse for us all is to turn to the Lord God with hearts that are humble and dependent and eager for his grace. After all, even in the face of death, “Everyone who calls on the name of the Lord will be saved” (Romans 10:13).

That is our only true hope in a world filled with such evil and pain.