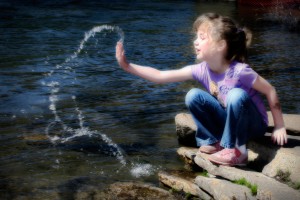 The sages tell of a famous king whose selfishness created much harm for those who followed him. The story goes that he made a vow that no one in his army could eat any food until dusk had come and he himself was avenged on his enemies. This was disastrous because the army was already nearly famished, worn down from fighting, and far from home. The king’s son, however, had not heard this order go out, so as he happened upon a rich honeycomb he dipped his staff into the golden substance and placed it to his mouth. His eyes lit up, his body felt stronger, and his spirit was refreshed. Yet when the king discovered that his son had done this he sought to kill him. And had it not been for the intervention of the army, the king would have succeded.

The sages tell of another famous king, the successor to the one just mentioned, whose spirit was quite different than the first. Though it was common to kill off any potential rivals to the throne, and certainly those who might attempt to claim any hereditary privilege, this king chose another path. He did indeed seek out the most obvious rival, but rather than threaten him offered him permenant residence in the palace. Rather than kill him off the king invited him to dine at his table for the rest of his life. Rather than ostracize him or send him far away, the king welcomed him into his inner-circle, honoring him throughout the remainder of his rule.

Two different approaches to life. One king was self-absorbed, risk-averse, and a taker of the dignity of those around him. The other king was selfless, willing to risk, and a giver to those around him, even to those who clearly were undeserving. One cannot help but think about the Greater King, the Lord Jesus, who once said, “The thief comes only to steal and kill and destroy. I came that they may have life and have it abundantly” (John 10:10).

These two stories put forward the two sides of masculinity in our world today. One side is much like the first king, rash, selfish, taking. The other side is like the second king, selfless, thoughtful, protective, generous. I must ask on which side I find myself. On which side do you find yourself?

The Prophet Isaiah penned in the thirty-second chapter of his great book a longing embedded within his heart and the hearts of his people. “Behold, a king will reign in righteousness, and princes will rule in justice” (Isaiah 32:1). Isaiah was specifically referencing the Messiah’s rule during the kingdom to be established after his return in glory. Along with the ruling Messiah would be nobles made worthy of their position because of the Messiah’s goodness. Together, these rulers would provide righteousness and justice, the idea being that integrity and honor would dominate the day.

Though Isaiah is thinking about the future, his words echo a longing for men who could live, love and lead like that right now. What might it be like for the kings and princes to rule with righteousness and justice today? Verse 2 gives us a hint. These kind of men would “be like a hiding place from the wind, a shelter from the storm, like streams of water in a dry place, like the shade of a great rock in a weary land.” Indeed, they would be a lot like the second king referenced above, protective and generous, and, still more, would be like the Messiah Jesus who came that people may have life and have it abundantly. There is an intentional commitment to safeguarding and making full the souls of those they love. Rulers like these would provide two very important things; things longed for by every heart on planet earth: safety and satisfaction.

And note the effect. Consider Isaiah 32:3-4: Then the eyes of those who see will not be closed, and the ears of those who hear will give attention. The heart of the hasty will understand and know, and the tongue of the stammerers will hasten to speak distinctly. Did you see the handful of benefits that come when men can create environments of safety and satisfaction?

Imagine then! When men strive to be generous, giving themselves selflessly to the world in which they find themselves, intentionally seeking who they can bless, willing to protect them and build into them, then those they serve are enriched. Their dignity is elevated, their purpose become clearer, peace overwhelms them, and courage flows out of them. Indeed, they become empowered to be everything that God intends them to be.

That is what real men allow, and they stop at nothing to ensure that is the world they leave behind. They exist that the people around them may have life, and have it to the full.

“Write This Down…” provides a restatement of selected points or observations from various teaching venues at which Pastor Matthew speaks. The preceding material is from Pastor Matthew’s message entitled, “Safety & Satisfaction,” part of the sermon series “Manhood: A Bold Call for Men of Nobilty,” presented on the weekend of March 11, 2012, at Bethel Church.