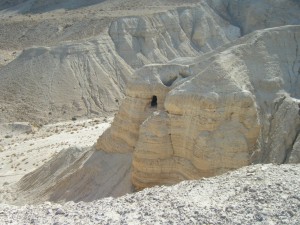 As soon as the Voice from Heaven offered its amazing affirmation that Jesus was the “beloved Son” and that in him the Father was “well pleased” (see Mark 1:11), we might expect that trumpets should blare and crowds to be jubilant. And being that we who associate with Christ Jesus likewise share in these precious affirmations (being loved and experiencing the Father’s pleasure), we might think we too should have trumpets and happy masses cheering us on.

But that is not the way it works. It is noteworthy that immediately following the authentication of Jesus at the Jordan River, he is hurled (the Greek language suggests being thrown) into the wilderness, at which place he deals with Satan, deprivation, and the common threats of a wild and desolate place. Consider how Mark describes this in Mark 1:12-13:

Mark’s modesty is telling. After all, the accounts presented by Matthew and Luke are much more expansive. Consider, for instance, Luke’s description of this experience, as found in Luke 4:1-13:

And Jesus, full of the Holy Spirit, returned from the Jordan and was led by the Spirit in the wilderness for forty days, being tempted by the devil. And he ate nothing during those days. And when they were ended, he was hungry. The devil said to him, “If you are the Son of God, command this stone to become bread.” And Jesus answered him, “It is written, ‘Man shall not live by bread alone.’” And the devil took him up and showed him all the kingdoms of the world in a moment of time, and said to him, “To you I will give all this authority and their glory, for it has been delivered to me, and I give it to whom I will. If you, then, will worship me, it will all be yours.” And Jesus answered him, “It is written, “‘You shall worship the Lord your God, and him only shall you serve.’”

And he took him to Jerusalem and set him on the pinnacle of the temple and said to him, “If you are the Son of God, throw yourself down from here, for it is written, “‘He will command his angels concerning you, to guard you,’ and “‘On their hands they will bear you up, lest you strike your foot against a stone.’” And Jesus answered him, “It is said, ‘You shall not put the Lord your God to the test.’” And when the devil had ended every temptation, he departed from him until an opportune time.

Taken from the whole of these accounts, there are some vital observations to be grapsed, especially as we think about temptation and the challenges that arise from such.

First, as noted above, we simply cannot dismiss the fact that the heavenly applause granted Jesus (and, by extension, we who are “in Christ”) does not guarantee bliss in this life. Immediately following the authentication of Christ at the River Jordan he is forced to deal with Satan’s schemes, the ferocity of the wild, hunger, and so forth. Often our identification with Christ brings humiliation and hardship. If it definitely does for our Lord Jesus, we should expect it will for us too.

Secondly, knowing and yielding to the rich truth of God’s Word is essential for survival. With each particular test that Satan threw at Jesus it was the Word of God that Jesus employed to stand firm. Indeed, this is so much so that Satan then attempted to also use the Word of God to con Jesus into failure. It is, therefore, not enough to cite Scripture; we must also know it well so we may use it wisely.

Thirdly, it is likely that Mark’s rather modest description of this season, in contrast to the more detailed accounts presented by Matthew (see Matthew 4:1-11) and Luke (as cited above), is to remind us that dealing with temptation and deprivation is not a mere seasonal situation, but an everyday reality. Though not intended, the accounts in Matthew and Luke can almost give the impression that the season of testing was short-lived and that Jesus was able to simply move on, with some sense of resolution to the problem of Satan and temptation. There is no perceived resolution in Mark’s story. Indeed, it would appear that the forty days of which Mark writes is more or less a template for all of the days of Jesus’ earthly life—and ours.

Next, while we ought to employ God’s Word when dealing with Satan’s schemes, we must also simply entrust ourselves to a faithful Lord who will minister to us in the midst of life’s raw realities. One must not miss the comparison between Jesus’ forty days in the wilderness and the forty days that Moses and Elijah experienced while also in wilderness places (see Exodus 24:18 and 1 Kings 19:8 respectively). In the cases of Moses and Elijah, and then, of course, of Jesus, God met the men where they were, allowing his presence to be experienced in a special way, serving them and caring for them and strengthening them. The same God who invited Moses into the cloud on the mountain, and whose angel fed Elijah while he was on the run, and whose angels ministered to Jesus in the wilderness, is the same God of whom the Apostle Paul writes when he declares, “No temptation has overtaken you that is not common to man. God is faithful, and he will not let you be tempted beyond your ability, but with the temptation he will also provide the way of escape, that you may be able to endure it” (1 Corinthians 10:13).
* * * * * * * * * *

“Write This Down” is a summary of select teaching moments offered by Pastor Matthew. The preceding summary is from the message “The Test,” the third message from the series entitled “Jesus, God’s Beloved Son,” a study through the Gospel of Mark, presented on the weekend of November 18, 2012, at Bethel Church.