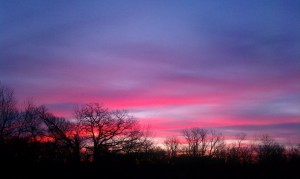 Here are a couple of important questions for you to answer. First, do you ever find yourself overwhelmed with an internal darkness that leaves you frightened, worried, empty, and convinced you must live the most obscure and alone life anybody has ever experienced? The second question is this: if Jesus were to speak to you, what would you first want to hear? Would it be that he loves you, or that you are okay, or that you are forgiven? What would it be?

These questions perfectly set up the account that Mark gives regarding the first moments of Jesus public ministry. Carefully read Mark 1:14-15:

Now after John was arrested, Jesus came into Galilee, proclaiming the gospel of God, and saying, “The time is fulfilled, and the kingdom of God is at hand; repent and believe in the gospel.”

Contextually, we must immediately note that John the Baptist has been imprisoned and is therefore no longer engaging in public ministry. He had been handed over to the authorities, which, interestingly, is the same language that Mark will later use to describe Jesus’ betrayal and arrest (see Mark 9:31, for instance). Moreover, we see that Jesus “came into Galilee.” His baptism and temptation experience likely took place near Jericho and the arid regions near the Dead Sea. That Jesus moved northward toward Galilee is very important, something that the discerning Jewish people would have most readily gotten, their attention having been drawn to a relatively obscure but important passage in the Book of Isaiah. Isaiah 9:1-7 reads as follows:

But there will be no gloom for her who was in anguish. In the former time he brought into contempt the land of Zebulun and the land of Naphtali, but in the latter time he has made glorious the way of the sea, the land beyond the Jordan, Galilee of the nations. The people who walked in darkness have seen a great light; those who dwelt in a land of deep darkness, on them has light shone.

You have multiplied the nation; you have increased its joy; they rejoice before you as with joy at the harvest, as they are glad when they divide the spoil. For the yoke of his burden, and the staff for his shoulder, the rod of his oppressor, you have broken as on the day of Midian.

For every boot of the tramping warrior in battle tumult and every garment rolled in blood will be burned as fuel for the fire. For to us a child is born, to us a son is given; and the government shall be upon his shoulder, and his name shall be called Wonderful Counselor, Mighty God, Everlasting Father, Prince of Peace.

Of the increase of his government and of peace there will be no end, on the throne of David and over his kingdom, to establish it and to uphold it with justice and with righteousness from this time forth and forevermore. The zeal of the LORD of hosts will do this.

This ancient prophecy regarding the “child” to come, or Jesus, affirms that into darkness light comes, blessings such as joy will abound, enemies will melt away, and what is a waste will be made clean. It is this powerful expectation that rests behind Mark’s simple statement that Jesus “came into Galilee.” By moving into Galilee as the first step in his public ministry, Jesus begins to fulfill the words of Isaiah 9. He is in the business of bringing light into dark places; whether it is a region broken by centuries of failure and oppression, such as Galilee, or your heart and mine.

And the first words Jesus offers, before anything else he could say, are telling. Mark 1:14 characterizes his words as the “gospel of God.” His words are “good news” or “glad tidings,” and they are from and about God (this is known as a plenary genitive in the Greek grammer). But what specifically is the good news? Verse 15 clarifies, sharing Jesus’ own words: “The time is fulfilled, and the kingdom of God is at hand; repent and believe.” The good news is, in effect, that the moment has arrived for God’s sovereign rule to unfold—the sovereign rule that is promised in Isaiah 9:6-7 and which had been anticipated by the Jewish people for millennia (see, for instance, 1 Samuel 7:12-14). They have been longing for a king who would come and make all things new, righting all wrongs, bringing justice, peace, order, and so forth. With the coming of Jesus a kingdom is being established, with the solidification of this kingdom coming about at Jesus’ glorious appearing as seen in Revelation 19-20.

Yet why are these first words of Jesus so telling? It would be powerful enough if his first words were “I love you,” or “I forgive you.” But as helpful and powerful as those kind of words would be, that they could come within the context of a great kingdom of righteousness and peace is even richer. By telling us the good news of God, that the kingdom is unfolding, we are privileged to get swept up into something far more powerful than heartfelt words of hope.

We get swept up into a whole new kind of existence.

“Write This Down” is a summary of select teaching moments offered by Pastor Matthew. The preceding summary is from the message “The Kingdom,” the fourth message from the series entitled “Jesus, God’s Beloved Son,” a study through the Gospel of Mark, presented on the weekend of November 25, 2012, at Bethel Church.