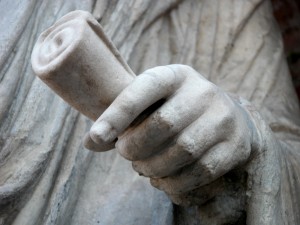 About ten years following Jesus’ death, resurrection and ascension, a man named Paul made his way into the mighty mountains of present-day Turkey, arriving in an important city known as Pisidian Antioch in the Roman province called Galatia. By the time Paul got there he was very sick (see Galatians 4:13), his bodily ailment unknown to us today, though scholars speculate it to have been malaria. Nonetheless, receiving the hospitality that was common at that time, he was nursed back to health, and as folks got to know him, folks got to understand that this Jewish man had a remarkable story. Within days of his recovery, he was invited to preach at the local Jewish synogogue (see Acts 13).

The climax of his sermon can be found in Act 13:38-39, at which place Paul powerfully affirms that true freedom is found in the person of Jesus Christ. “Through Jesus Christ forgiveness of sins is proclaimed to you,” Paul declared. “By him everyone who believes is freed from everything from which you could not be freed by the law of Moses.” Scandalous words in a synogogue! Yet the people wanted more (Acts 13:42), and thus began the development of the first of a series of church communities that Paul would plant throughout the Roman Empire, churches not defined by bricks and mortar, but by a personal relationship with Jesus the Savior.

Time went on. Paul had moved on to serve the Lord in other locales. Eventually, sadly, word came to Paul that things were going awry in Galatia. Some people, known as Judaizers, had infiltrated the ranks of the true believers and begun to poison them regarding the gospel of Jesus Christ. “Well,” they essentially communicated, “what Paul said about Jesus is sort of true. Yes, Jesus did a powerful thing by dying on the cross. However, there is more to managing our spiritual destiny than believing in this Jesus. You must either begin or continue to yield to the ceremonial rituals and the many rules of the Jewish legal code given by Moses. This assures your true spiritual maturity. We’re sorry Paul didn’t explain this to you.”

To say that Paul was angry is a gross understatement. The very essence of Christianity was being threatened by what these Judaizers were teaching. As soon as he reasonably could Paul fired a letter off to the Galatian churches. The Epistle of Galatia, found in the New Testament, is that letter. Chapter one highlights three important realities regarding the entire matter.

First, Paul is astonished; even angry. “I am astonished that you are so quickly deserting him who called you in the grace of Christ and are turning to a different gospel—not that there is another one, but there are some who trouble you and want to distort the gospel of Christ” (Gal. 1:6-7). The word “astonished” suggests that Paul is absolutely beside himself with shock. He is marveling at how weak-willed the Galatians were. And the word he uses for deserting implies a turncoat or a traitor. These are strong words offered to dear friends.

Stronger still is Paul’s insistence that those who trouble his friends with a lie about the gospel should “be accursed” (Gal. 1:8, 9). The word, anathema, demands a holy destruction, and is reminscent of the destruction the ancient Israelites were to have brought upon the idol-worshipping villages of old. Paul makes it abundantly clear that when it comes to the integrity of the gospel of Christ there is room for righteous indignation. I’m reminded, by the way, that if you or I live in a world of profound legalism and generational spiritual abuse, we should be angry enough to call it out. Too much is at stake.

A second reality embedded within chapter one relates to Paul’s authority. The Judaizers were attempting to convince the Galatians that Paul lacked the credentials and the education to truly help them understand spiritual things. Paul speaks into this by reminding his readers that he was actually an “apostle” (Gal. 1:1), sent with a commission not by any human council but “through Jesus Christ” himself. Indeed, he even had “brothers” who could validate this fact (Gal. 1:2).

Moreover, he received this commissioning in a rather dramatic fashion on the road to Damascus, by none other than Jesus Christ (see Acts 9, for starters; Gal. 1:12 and following). No man sanctioned this transformation from dangerous oppressor to bold ambassador. It was the Lord alone who did. In fact, because this was true, Paul found it utterly unecessary to make his way to Jerusalem to get any endorsements from the first apostles like Peter or James. When he did finally go see them (Gal. 1:18 and following) years had gone by, and Paul’s reputation spoke for itself. His visit at that point was more out of courtesy and for fellowship than any need to have their support.

The last reality worth recognizing relates to substitutionary atonement. This theological construct is embedded in Galatians 1:4, and centers around the notion that Jesus Christ “gave himself for our sins.” The word “for” is a strong Greek word (hyper) that speaks of substitution, as when a professional letter writer would pen that which was dictated to him by an executive, presenting the idea that the letter was actually from the executive himself. That hyper touches the legal realm is noteworthy as well. There is something official or formal about the word. Furthermore, grammatically, it has a possessive flavor that speaks to the Lord’s ownership of those for whom he willingly is a substitute.

Atonement essentially means to reconcile two parties at someone’s expense. When Jesus Christ died in our place to pay sin’s penalty, thereby satisfying the just wrath of a holy God, he thereby reconciled the believer to this great God. The infinite chasm seperating the two parties had been closed. Especialy poignant is the fact that it was Jesus Christ who did the work of giving himself in our stead. No one else was there. The work of redemption was carried out sufficiently and exclusively. Adding to it, as the Judaizers would have the Galatians to believe, was nothing short of heresy.

“Write This Down” is a summary of select teaching moments offered by Pastor Matthew. The preceding summary is from the message “No Other Gospel,” part of the sermon series “Galatians: No Other Gospel,” presented on the weekend of May 13, 2012, at Bethel Church.