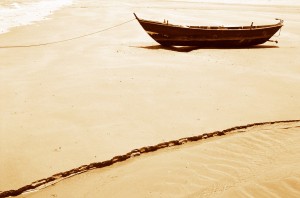 Tucked tightly between the passage about Jesus’ healing the man with the withered hand and the calling of the twelve apostles is a seemingly modest account of a great crowd coming to Jesus for physical healing. Read carefully what Mark has penned about this particular moment in Jesus’ remarkable life:

Jesus withdrew with his disciples to the sea, and a great crowd followed, from Galilee and Judea and Jerusalem and Idumea and from beyond the Jordan and from around Tyre and Sidon. When the great crowd heard all that he was doing, they came to him. And he told his disciples to have a boat ready for him because of the crowd, lest they crush him, for he had healed many, so that all who had diseases pressed around him to touch him. And whenever the unclean spirits saw him, they fell down before him and cried out, “You are the Son of God.” And he strictly ordered them not to make him known. (Mark 3:7-12)

The Crowd. One of the prominent features of this account is the crowd that has pressed in against Jesus. From where the people in the crowd come is noteworthy. For the first time in Mark’s narrative we see the scope of things expanding beyond the familiar confines of Galilee to the greater region, a hint regarding Jesus’ passion for the world as a whole. Not only does Mark reference the regions of Galilee and Judea as important players here, but also Idumea, from whence the Herodian dynasty comes, which is a mixed-race people at great odds with traditional Jews. Moreover, Gentiles from Sidon and Tyre as well as the land to the east of the Jordan River are referenced. These Greek-speaking people own a vastly different view of the world than their Jewish neighbors.

And it is a huge crowd. Mark emphasizes in verse 7 and verse 8 that it was a gathering of a “great crowd.” Literally it was a multitude of multitudes, or numerous numbers. The redundancy says something about the true scope of the crowd. It was not merely hundreds, or even a thousand, but thousands and thousands. This of course says something regarding the popularity of Jesus and the degree to which his influence was taking hold in the region.

Common Grace. The text tells us that they pressed to see Jesus in large measure because they wanted physical healing. It is important to catch that they “heard all that he was doing,” so “they came to him.” Their gathering was not so much because of the things Jesus has been teaching, though those things may have been somewhat compelling to many in the crowd. It was the activity of Jesus that was captivating. They came to be healed, and not much more. That Jesus accommodated this so graciously and marvelously, without necessarily receiving anything in return by way of lasting allegiance, says something about his capacity to love. Common grace is the demonstration of the love of Jesus to anyone and everyone with little or no return. Indeed, as the entire Marcan narrative unfolds many of these who gathered here and had their lives changed, fell away from Jesus as his words took root and his message got more difficult.

The Cross. The acclaim of the demons was not what it appears. Granted, they declared Jesus to be the Son of God, and they likely did so in large measure because more than any beings they are in-tune with the reality of Jesus as the Incarnate God. But they do hate him rather than love him and resist him rather than desire to honor him. Beyond the mere recognition of reality, I think the demons called out Jesus’ identity to confuse and manipulate the crowd. If the crowd can associate Jesus’ healing in their lives with the idea that he is the Son of God, and merely relegate such a title to that alone—to the status of a mere miracle worker—then the crowd will not stretch themselves to see Jesus as more than a healer. Jesus silences the demons, however, in order to ensure that he himself controls the message of who he is. They must not limit the crowd’s view of Jesus. If someone is going to declare Jesus as the Son of God, it will be at the cross (cp. Mark 15:39), when the Roman centurion makes such a remark about the crucified Christ. Only then will the fullest extent of Jesus ministry be realized, and that is what Jesus wants the crowds to anticipate.

“Write This Down” is a summary of select teaching moments offered by Pastor Matthew. The preceding summary is from the message “Legitimizing the Lord”, the fifteenth message from the series entitled “Jesus, God’s Beloved Son,” a study through the Gospel of Mark, presented on the weekend of April 14, 2013, at Bethel Church.