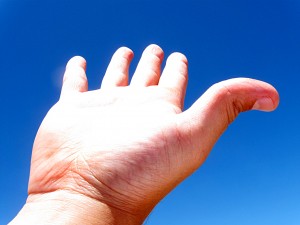 Again he entered the synagogue, and a man was there with a withered hand. And they watched Jesus, to see whether he would heal him on the Sabbath, so that they might accuse him. And he said to the man with the withered hand, “Come here.” And he said to them, “Is it lawful on the Sabbath to do good or to do harm, to save life or to kill?” But they were silent. And he looked around at them with anger, grieved at their hardness of heart, and said to the man, “Stretch out your hand.” He stretched it out, and his hand was restored. The Pharisees went out and immediately held counsel with the Herodians against him, how to destroy him. (Mark 3:1-6 ESV)

Legend has it that the man with the withered hand was a stone mason, and, as the grammatical construction suggests, the deformed hand was not something with which he was born but likely the result of an accident. Regardless of how it came about, his deformity was undoubtedly a humiliating feature of his life. It would have essentially ended his career as a craftsman, robbed him of whatever stature he had in the community, and caused him to be excluded from the synagogue. In effect, his withered hand turned him into a societal outcast, making his appearance in the synagogue profoundly curious. Desperate as they were to trap Jesus, it would appear the religious officials—the Pharisees and scribes and their ilk—had manipulated the man with the withered hand into parking himself right in the middle of the synagogue crowd, to be used as pawn with the goal of entrapping Jesus. If Jesus, on the Sabbath, were to heal the man, then the officials could accuse him of breaking the law. If Jesus were to ignore the man, then the officials could accuse him of being heartless. It appears the officials have a perfect set up, and the man with the withered hand is right in the middle of it, being used as their pawn.

The Pharisees and scribes (cp. Luke 6:7) had no problem using the man with the withered hand for their devious plot. What might that say about the nature of their hearts? One of the things that clearly troubles them is that this Jesus character is not abiding by their rules regarding the Sabbath. He helps people, he feeds people (see Mark 2:23-28), and so forth. It evidently does not dawn on these religious officials that their incessant scheming against Jesus—on the Sabbath, nonetheless—is a far greater crime than any of the good things Jesus is doing. They are so threatened by Jesus, so concerned that their agenda will be thwarted by Jesus’ good will and good work, that they are determined to undermine him at the least and destroy him at the most. Are you like this? Is your heart so hardened (see Mark 3:5) that you have no trouble manipulating those around you for the promotion of your own agenda? Do you recognize this in your life? And, by the way, is there a sense in which you may be utterly self-righteous, and you are subconsciously challenging the Lord at every turn to simply see what autonomy you actually have?

Jesus willingly, boldly, and passionately steps right in the middle of this scenario. According the Luke 6:6 he was teaching in the synagogue. No doubt he saw the man with the withered hand; indeed, Mark 3:1 makes it clear that when Jesus got to the synagogue the “man was there,” perhaps situated so he could not be missed. It would seem that Jesus proceeded to teach, and then when he was finished he addressed the proverbial elephant in the room. The way he did so is the embodiment of brilliance. After all, it was commonly understood that someone without a life-threatening situation should not be healed on the Sabbath. Healing under such circumstances would be perceived as working. With that in mind Jesus avoided the expected question of “Should this man be healed on the Sabbath?”. The answer from the officials and the crowd would have been “no.” Thus, his question went much deeper. “Is it lawful on the Sabbath to do good or to do harm, to save life or to kill?” The only obvious answer to that question would be “do good and save life.” Were the officials to answer affirmatively then they would be granting permission for Jesus to do something positive in the life of the man with the withered hand, thus completely undermining their scheme. Were they to answer negatively, then they would be clearly denying what even they knew should be the spirit of every day, not to mention the Sabbath day. Moreover, in Jesus’ question was a slight hint toward their own murderous plotting against Jesus. In light of these things the officials remain silent, provoking Jesus to deep anger that gave way to a persistent grief at their calcified hearts.

Mark 1:2 suggests that there is much in Mark’s historical narrative that reflects the writings of the ancient prophet Isaiah. With that in mind, one cannot help but wonder if Jesus is thinking about Isaiah 1 while caught up in this intense moment in the synagogue. Isaiah 1:14-15 reads:

Your new moons and your appointed feasts
my soul hates;
they have become a burden to me;
I am weary of bearing them.
When you spread out your hands,
I will hide my eyes from you;
even though you make many prayers,
I will not listen;
your hands are full of blood.

Notice the idea that when the self-righteous spread out their hands the Lord will hide his eyes. What a contrast to the broken pawn of a man who is helped when he by faith stretches out his hand. Indeed, in the next verses in Isaiah 1, the Lord lays out the manner in which he thinks life ought to work. Verse 17 says, “learn to do good; seek justice, correct oppression; bring justice to the fatherless, plead the widow’s cause.” Embracing the dignity that God wishes to extend to us is the great joy of all of us withered people. Extending that dignity is the great responsibility of every true disciple.

“Write This Down” is a summary of select teaching moments offered by Pastor Matthew. The preceding summary is from the message “Doing Good, Planning Harm”, the fourteenth message from the series entitled “Jesus, God’s Beloved Son,” a study through the Gospel of Mark, presented on the weekend of April 7, 2013, at Bethel Church.