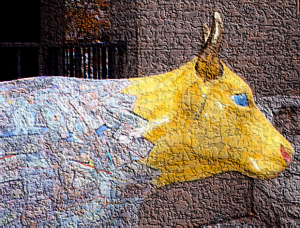 Tucked within the ancient scrolls is an honest assessment about a rebellious people whose world is falling apart around them. Consider, from Hosea 13:2, the following: It is said of them, “Those who offer human sacrifices kiss calves!”

The “calves” referenced in this old statement are the silvery idols crafted by human hands and then bowed down to by their dubious creators. “Gods,” they are, in the eyes of the people who made them. Amazing is the drive of the human soul to create its own object of worship. The reality is we are all built to worship something or someone; when we choose to deny the Maker of Heaven and Earth—perhaps because we cannot bear his scrutiny or we hate the idea of authentic relationship rooted in transcendent standards—we go off and make gods that we are comfortable with.

Gods that won’t redirect our thinking. Gods made in our image.

Gods that are inspiring enough in their beauty to cause us to taste something larger-than-life, but not so grand as to expose our utter nothingness.

We passionately kiss the silver calves, and then tell ourselves that we are spiritually satisfied and justified.

Perhaps most haunting of all of the words in the ancient statement found above is the phrase about offering human sacrifices. In the days of old people would take their babies and offer them over as sacrifices to the idols that had been constructed. The smell of the babies’ burning flesh, the bloody cutting of the priests and cult prostitutes, the adrenaline rush of giving over the child to the cause—all of these things served up quite a nirvana-esque worship experience for the participants. Taking the fruit of the womb and watching that fruit be destroyed on the flames engraved a powerful and defining picture into not only the mind but the psyche of the community. Among the things reinforced was that life was cheap and that incessant catering to the idols that the community itself had crafted was paramount. Indeed, because they crafted the idols, the reality was they were merely catering to themselves. And the killing of the newborns on the altars was that most strange way of legitimizing the whole construct. “We can cater to the idols (i.e., ourselves) because we offer such a great sacrifice from within ourselves (i.e., the babies).” Kill the kids and kiss the calves. This creates an ironic spiritual climate that includes redemption (sacrificing the children buys the community’s self-actualization) and justification (freedom for ourselves comes at great cost to ourselves and so it’s all worthwhile). Of course, despite these savage mores, little or nothing is ever said about the rape of the soul of the mother, conditioned as she is to offer up her child to the flames. And nothing is ever said of the child and her own thoughts on the matter.

After all, it is the community’s self-actualization that matters, and nothing trumps what the community wants, even if all of the supposed “choice” so idolized by the community is the horrid echo of a culture of death.

Kill the kids and kiss the calves. Sacrifice the fruit of the womb and anything else is fair game. Get rid of the living obstacles so that we can be free to do what we want, worship the gods of our own choosing, realize our own destinies, apart from any intervention by anything that might actually be bigger than ourselves. The ancient people of Hosea’s day did this, multiplying “falsehood and violence” (Hos. 12:1). The Roman Empire essentially declined because death and decadence came to dominate its grandeur. The Third Reich took this template to a whole other demonic place, with the Holocaust destroying those in the way so the Nazis could kiss the calves of their own glory.

And I fear we in America have been and are doing the same, particular since Roe v Wade, and the calves are returning to feast, lowing the whole way home something about our society’s moral rape and the disintegration of those values that had at one time in the past set us apart and exposed our general dependence on someone truly Transcendent.