“Write This Down…” provides a restatement of selected points or observations from various teaching venues at which Pastor Matthew speaks. The following material is from Pastor Matthew’s sermon entitled, “God is the King!”, part of the sermon series “Memoirs of an Ancient Prophet: A Study of the Book of Daniel,” presented the weekend of January 16, 2011, at Bethel Church:

King Nebuchadnezzar’s dream is not merely a message for him as ruler of Babylon, but it is a message for all peoples regarding God’s unfolding plan for the ages. And embedded within the dream are handful of strong applications for us all. But first, the dream itself presents a great statue that both captivates the mind and confirms God’s utter sovereignty. Consider the following:

The head of gold is King Nebuchadnezzar (cp. Daniel 2:37). This represents the Babylonian Empire which reached its zenith under Nebuchadnezzar’s rule; a rule which began in 605 BC. That it is gold speaks to how prominent this empire is, and how weighty, which suggests something of its influence for millenia to come.

The arms and chest of silver, mentioned in Daniel 2:39 refers to the Medo-Persian Empire which conquered Babylon in 539 BC. The two arms represent the coming together of the two people-groups, the Medes and the Persians, into one empire. This was a vaster kingdom than Babylon, but not quite as prominent in terms of authoritarian rule and unity. 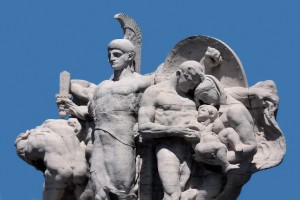 The legs of iron, spoken of in Daniel 2:40,  represent the Roman Empire, which took the wrested world-dominion from the Greeks in 63 BC. The two legs speak to the two parts of the empire, the east and the west, and the iron reminds one of the overwhelming power and strength of this vast empire. Unlike the previous empires the Roman Empire never was actually defeated. Rather, it essentially went dormant as a unified kingdom, become fragmented and diverse and becoming scattered throughout Europe and beyond. Thus, the feet of clay mixed with iron (cp. Daniel 2:41). The ten toes imply a  future, revitalized Roman Empire that will be fragmented though influential. The conviction here is that this empire is yet to come; that it will dominate during the end of days.

Of course, all of these ultimately give way to that kingdom that is established “by no human hand” (Daniel 2:45). This will be the Kingdom of God established in fullness upon the earth. The “stone” is the Lord Jesus (cp. 1 Peter 2:8) who serves as the King of All.

There are some important lessons to be learned from this prophecy. First, it is clear that God’s Word does come true. This prophecy was first delivered about 603 BC in Babylon. Historians remained mystified by the accuracy with which the kingdoms unfold in the years following.

Secondly, it is evident that God equips His children (like Daniel) to engage a broken and dark world with Truth. Daniel confronted the most powerful king on earth with news of things to come. King Nebuchadnezzar was never the same.

Thirdly, God loves the nations and seeks to engage them with His redemptive purposes. It was to have been Israel’s job (cp. Exodus 19;5-6; Psalm 96:3), but Israel rejected God. God, undeterred by this temporary rejection, pursued the Gentile nations anyway. His love is unrelenting.

Fourthly, God will judge the nations. Daniel 2:44 makes it clear that judgment is coming. God is gracious toward the nations that they may know of His salvation, yet He will judge them for their treatment of His chosen people, Israel, and for their general wickedness.

Lastly, God will establish a Kingdom for which we may hope. What a glorious day that will be. As the Apostle John writes in Revelation 22:20: “Amen. Come, Lord Jesus!”