“Write This Down…” provides a restatement of selected points or observations from various teaching venues at which Pastor Matthew speaks. The following material is from Pastor Matthew’s sermon entitled, “Beware of the Insane One,” part of the sermon series “Memoirs of an Ancient Prophet: A Study of the Book of Daniel,” presented the weekend of March 6, 2011, at Bethel Church:

When turning one’s attention from Daniel 7 to Daniel 8, one finds a major shift in theme and detail. For instance, the language changes from the ancient Aramaic to the ancient Hebrew. This alone speaks volumes about the focus. Whereas Daniel 2-7 had been largely about the successive movement of Gentile world powers, Daniel 8-12 return the focus to the world from the vantage point of the Hebrew person. Furthermore, Daniel 7, like its close kin Daniel 2, speak in a macro way about major empires and their influence. Daniel 8 takes a more micro view, highlights two of the four major world powers, and then narrows the focus still further to one of the leaders to rise up from one of those powers. It helps to think of the text of Daniel 8 divided into three sections.

The Clash of Two Empires. Daniel 8:1 and following give attention to the conflict between the two middle powers found in the progression of the four great empires revealed in Daniel 2 and Daniel 7: these powers are, according to Daniel 8:20-21, the Medo-Persian Empire and its successor, the empire of Greece led by Alexander the Great. The Medo-Persian Empire is represented as an imposing ram (Daniel 8:3), and the Greek Empire as a shaggy male goat (Daniel 8:5). Though the ram was great and mighty, the swift and angry goat tackled it and trampled it to the ground. This is a clear reference to the swift destruction that Alexander the Great brought upon the Medo-Persian Empire from around 334 BC to about 331 BC. 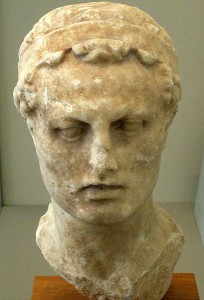 The Crazy King. Beginning in Daniel 8:9 detail is given about one of the successors to a certain quarter of Alexander’s empire. History knows him as Antiochus IV Epiphanes, and his rule is most notable for the 2,300 days of occupation and destruction (cp. Daniel 8:14, 26) of Jerusalem and the surrounding environs from 171 BC until his death in 164 BC. During this time he murdered the rightful chief priest, a man named Onias III, replaced him with a puppet pagan priest, and ultimately, on December 16, 167 BC, desecrated the Jerusalem temple by sacrificing a pig on the altar. Thus began a major Jewish war known as the Maccabean War, which ultimately led to the defeat of Antiochus IV Epiphanes (the Jews referred to him as Antiochus IV Epimanes, which means “insane or crazy one”), and the reestablishment of the traditional Hebrew temple practice.

Though Daniel receives this vision about 400 years earlier, Daniel 8:23 and following give some precise details regarding the nature of Antiochus IV Epiphanes. He will be a man defined by the ability to understand dark realities, empowerment from Satan (cp. 2 Thessalonians 2:9; Revelation 13:1 and following), the destruction he brings on the environment and people around him (cp. Daniel 8:24), utter deceit (cp. Daniel 8:25), betrayal, and opposition against God’s anointed (in his case, the chief priest).

The Coming Evil. The reality is, that while Antiochus IV Epiphanes is a real historical character attested to universally by secular and biblical scholars, it is clear in Daniel 8 that he serves as a type for the antichrist to come. A type is an event, person or idea that is used to foreshadow a later reality. The events that unfold around Antiochus IV Epiphanes serve to foreshadow or prefigure the nature and character of an evil one who will rule “at the latter end of the indignation” (Daniel 8:19), that is, during the end times. In fact, the angel Gabriel, sent to help Daniel understand the vision in Daniel 8, mentions five times that the matters surrounding Antiochus IV Epiphanes serve to bring understanding to the end times (see Daniel 8:17, 19, 23, 26), and the “man of lawlessness” (2 Thessalonians 2:3) who is to come.

Daniel 8:27 offers some interesting insight into how to respond to the prophesies of the chapter. Daniel, clearly disturbed, takes some time to process and, we expect, pray. Indeed, the text says he was “sick for some days” (Daniel 8:27). But, upon recovery, he immediately returned to “the king’s business.” He refused to let the troubling vision get the best of him, knew he needed to engage the world around him, “appalled” as he was by it all. And so must we engage the world around us, about the business of our greater King Jesus, and, though not fully understanding all that God is about, sobered and on point, for, as we often affirm, the time is short and the needs are great, and there is a whole world of people desperately needing to hear the story of so great a Savior as Jesus.