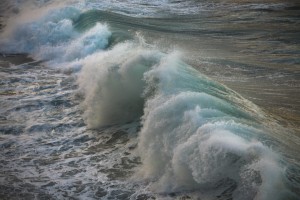 I’ve actually been in the San Diego area the past few days attending a gathering of Evangelical Free Church pastors, known as the K Club, and have followed this with a three day personal retreat. This morning I stood with thousands of others on the seawall alongside of the coast here in Carlsbad, California, looking intently out to sea, searching for whatever tell-tale sign might come of a tsunami resulting from the the horrid 8.9 earthquake that hours ago devasted so much of Japan. I might have slept two hours this morning, with one eye on CNN and Fox News and another eye on the suitcase beckoning me to pack for that quick getaway that might be necessitated by an oncoming wave or two.

I suppose I might have noticed the first wave or two that came silently toward the southern California coast. But, frankly, my thoughts were not all that tuned into what was going on around me. Rather, the images from Japan were cutting deep within me, and its those images that consummed the muted mumblings of the majority of the vast crowd with whom I gathered. We’re all looking out to sea like NASCAR fans awaiting a wreck. Meanwhile, nearly 6,000 miles away from where I was standing is a kind of devastation of which I know nothing.

I’ve said this before, and I’ll say it again. For the life of me I don’t know why God allows such things to occur as they do. I get all of the theological answers regarding the earth’s yearning for the consummation of all things. I understand the fact that with each passing day we are stepping closer to the Glorious Return, and that part of the raw fanfare precipitating that fantastic event is a nasty parade of earthquakes and the like. I can grasp the notion that all of creation was jolted by Adam’s rebellion, and hasn’t been the same since. I do indeed understand these realities. I’m at peace with them. Again . . . I get it. But when I see the woeful eyes of humanity scrambling out from under crushed buildings and watch in horror as entire villages are swept away, I have to admit that there’s something deep within me that simply jettisons my rationality and replaces it with intensely raw pain and a host of questions to God that all mean something like Why?.

And the answer I get in return is not a theological discourse on the sovereignty of God or the brokenness of creation. The answer I get is really more of an invitation to own simple mercy, a crushed heart that prays with compassion, eyes willing to weep, and hands willing to help, presuming, of course, that I’m somewhere where such hands can be offered. What else can we do?