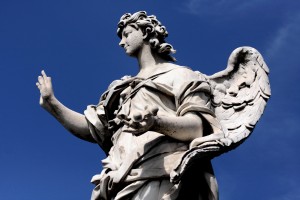 Daniel 10:1 and following offers an incredible though brief glimpse into a world rarely seen or understood, for here we find that beyond the veil of time and space angels and demons are vying against one another in the great contest between the Mighty God and his purposes and God’s foe, Satan, and his purposes. This reality is revealed to Daniel for two primary reasons. One reason it is revealed is to explain a three week delay in receiving an answer to prayer that Daniel had offered to God (Dan. 10:12-13). Another reason this reality is revealed to Daniel is to reinforce with Daniel and the reader that behind the great movement of nations throughout time are forces at work that have a far more cosmic influence than we might ever expect; we would be remiss to reduce the things we see to mere happenstance or think of the affairs of time and space as one-dimensional realities.

By allowing Daniel to peer into the world beyond the veil, so to speak, an opportunity is presented to give fuller consideration to angels and demons. Though not totally taken from Daniel 10, there are a handful of facts from God’s Word about angels and demons, facts that are worth noting. Consider the following:

First, angels are subservient to deity. Hebrews 1:6 makes it clear that all of the angels “worship” God. Like men, this will happen either willingly or unwillingly, but it will happen (cp. Philippians 2:10-11).

Secondly, Hebrews 1:14 tells us that angels are “ministering spirits sent out to serve for the sake of those wh are to inherit salvation.” One can deduce logically that fallen angels are committed to the opposite cause—to hindering God’s purposes in our lives.

Thirdly, though subservient to deity, angelic beings, both holy and evil, are of a higher order than mankind. Hebrews 2:7 says that when Jesus came to earth as a man who was then made “lower than the angels.”

Fourthly, the established condition of angels is eternally fixed. From the moment Satan rebelled against God, taking with him a huge swath of the angelic hosts, those fallen creatures are eternally fixed as condemned. Likewise, those who remained at God’s side during that rebellion are eternally privileged. Good angels will not, at this point, fall. Nor will fallen angels find redemption. Hebrews 2:16, following an account of Jesus’ transforming work, makes it clear that “it is not angels that he helps.”

Fifthly, there is an order of rank among angels and demons. The order seems to work along these lines: 1) there is the archangel known as Michael, a holy ruler who also is a prince over the people of Israel (cp. Jude 9 and Daniel 12:1). 2) there are cherubim, of whom Satan was once a part, who provide unique leadership at God’s side (cp. Genesis 3:24, Ezekiel 28:14, etc.). 3) there are seraphim, serving around the throne of God, who facilitate worship and the proclamation of God’s salvation purposes (cp. Isaiah 6:1 and following). 4) there are assorted regional princes or rulers, such as the prince of Persia in Daniel 10:13 (again, see also Daniel 12:1). 5) there are rulers and principalities of various kinds, no doubt providing some order to the overall structure found within the ranks of both holy and fallen angels (see Ephesians 1:21 and Eph. 6:12). And then there are 6) angels of other ranks, general soldiers, if you will, who fulfill God’s purposes as ministering spirits.

The realities of the world beyond the veil of time and space need not make us afraid. Rather, we need to be reminded that our world is far more complex than what meets the eye. As the Apostle Paul so rightly declares, “we do not wrestle against flesh and blood, but against the rulers, against the authorities, aganist the cosmic powers over this present darkness, against the spiritual forces of evil in the heavenly places” (Eph. 6:12). Thus it is that we must, as did Daniel in Daniel 10 and throughout his long life, be in “prayer at all times in the spirit, with all prayer and supplication” (Eph. 6:18).

“Write This Down…” provides a restatement of selected points or observations from various teaching venues at which Pastor Matthew speaks. The preceding material is from Pastor Matthew’s sermon entitled, “A Prayer of Persistence,” part of the sermon series “Memoirs of an Ancient Prophet: A Study of the Book of Daniel,” presented the weekend of April 4, 2011, at Bethel Church.