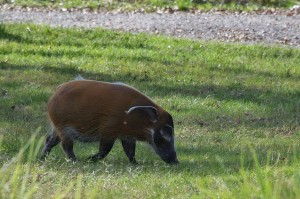 When Jesus and his disciples made it to the other side of the Sea of Galilee, following the fierce storm that had erupted upon them, one should expect a brief reprieve for them. Surely they were exhausted and frightened. Indeed, Mark 4:41 says as much. Perhaps now that they have landed on the eastern shoreline they can catch their breath, get some rest, and have some margin.

But that was not meant to be. Consider the quite dramatic scene that met them upon their arrival:

They came to the other side of the sea, to the country of the Gerasenes. And when Jesus had stepped out of the boat, immediately there met him out of the tombs a man with an unclean spirit. He lived among the tombs. And no one could bind him anymore, not even with a chain, for he had often been bound with shackles and chains, but he wrenched the chains apart, and he broke the shackles in pieces. No one had the strength to subdue him. Night and day among the tombs and on the mountains he was always crying out and cutting himself with stones. And when he saw Jesus from afar, he ran and fell down before him. And crying out with a loud voice, he said, “What have you to do with me, Jesus, Son of the Most High God? I adjure you by God, do not torment me.” For he was saying to him, “Come out of the man, you unclean spirit!” And Jesus asked him, “What is your name?” He replied, “My name is Legion, for we are many.” And he begged him earnestly not to send them out of the country. Now a great herd of pigs was feeding there on the hillside, and they begged him, saying, “Send us to the pigs; let us enter them.” So he gave them permission. And the unclean spirits came out and entered the pigs; and the herd, numbering about two thousand, rushed down the steep bank into the sea and drowned in the sea.

The herdsmen fled and told it in the city and in the country. And people came to see what it was that had happened. And they came to Jesus and saw the demon-possessed man, the one who had had the legion, sitting there, clothed and in his right mind, and they were afraid. And those who had seen it described to them what had happened to the demon-possessed man and to the pigs. And they began to beg Jesus to depart from their region. As he was getting into the boat, the man who had been possessed with demons begged him that he might be with him. And he did not permit him but said to him, “Go home to your friends and tell them how much the Lord has done for you, and how he has had mercy on you.” And he went away and began to proclaim in the Decapolis how much Jesus had done for him, and everyone marveled. (Mark 5:1-20 ESV)

Two critical things must be observed. First, we must not play games with the Dark Side. It is real, it is powerful, and it is bent on destruction. Within this reality we must acknowledge the existence of demonic forces. While it might be seemingly sophisticated to downplay or dismiss such narratives as fanciful, such moments are all too common not only in Jesus’ ministry but even today throughout the world, including our comfortable communities in the United States. We must be very discerning about those things in our lives that play into the schemes of Satan and his minions. This is why the Apostle Paul spoke of putting on the whole armor of God, “that you may be able to stand against the schemes of the devil” (Ephesians 6:11). Dabbling in anything that may celebrate Satan’s authority, either his own or that which is borne through his demonic minions, is exceedingly dangerous. Most of us likely do not appreciate just how real and powerful is the Dark Side, and so we too easily mess playfully, blindly or callously with it. Perhaps this is how the Gerasene Demoniac stepped into his awful circumstances—simple dabbling which became naïve allegiances which became utter destruction. This, of course, gives way to another reality within the broader scope of the Dark Side’s danger: Satan and his minions are about destroying you and me. Revelation 9:11 refers to Satan as Apollyon, a Greek name meaning “destroyer.” That is why the demons begged Jesus to send them into the herd of pigs. If they could no longer bring destruction on the unfortunate man, then perhaps they could manifest their destructive ways upon the pigs—their appetite to destroy is that great. Again, this begs for us to pause and consider the danger of that which is satanic.

The other thing to be observed is that Jesus is more powerful than the Dark Side. With little effort he confronts the demons that are possessing this most unfortunate man. The utter terror that the demons have of Jesus is evidenced by the fact that they beg him not to torture them. They clearly acknowledge his person and his power—crying out understanding that Jesus is the “Son of the Most High God” (Mark 5:7). That is not to say they give him allegiance; it is merely to demonstrate their awareness of his dignity and deity. That there are perhaps thousands of demons that have latched onto this man is possible; the name “Legion” (Mark 5:9) suggests as much (a Roman legion is a military contingent of nearly 6,000 foot soldiers plus cavalry and technical support). What we can assume is the number of demons with which Jesus was here dealing was huge, yet with ease he dispatches them toward the pigs away from the man. One wonders why he did not simply destroy them, but to do so would have gotten ahead of his redemptive timetable, and regardless of the circumstances with which Jesus deals, he refuses throughout his earthly  ministry to get off track. The time will come, however. Revelation 20:10 suggests that there will be a time when Satan and his minion will be contained in eternal torment because of God’s just judgment.

A few important points to consider are these: first, we must remain steadfast in discerning the Evil One’s ways and avoiding those things that will trip us up. A man becomes what he thinks about all day long. Giving genuine attention to God’s values and purposes, and letting those things define our lives, will aid us in not dwelling long on the enticements of the Dark Side. Moreover, we must use God’s wisdom to see through some of the subtleties of the demonic realm. Obvious things like mediums and the occult and so forth should be avoided at all costs; and still other less obvious acts of unrighteousness by which we become vulnerable to the Evil One must be likewise avoided.

Secondly, we must be “praying at all times in the Spirit, with all prayer and supplication” (Eph. 6:18). This helps us stay alert. [Tweet “No prayer should be spoken without a plea to the Father for protection from the enemy of our souls.”]

Thirdly, we must rest confidently in the overwhelming power of the great God. Jesus says in John 17:33, “In this world you will have tribulation. But take heart; I have overcome the world.” And to this we must give a hearty and faithful, “Amen.”

“Write This Down” is a summary of select teaching moments offered by Pastor Matthew. The preceding material is from the message “Two Thousand Pigs Under the Sea”,  part four of the sermon series entitled, “Piercing the Darkness,” presented on the weekend of October 13, 2013, at Bethel Church.