Your King is Coming! 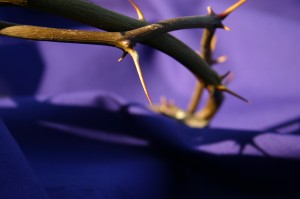 Five hundred and forty years before the first Easter a prophet named Zechariah captured the attention of God’s people, speaking directly into their vulnerabilities, fears and brokenness. After seventy years of exile within the high walls of a brutal empire, the Jewish people had been released to return to their ancient homeland and its capital, Jerusalem. They were a most insecure people. All they had known for generations was violence at the hands of one king after the next, beginning with their own kings, and then the rulers of conquering nations. Johoahaz, Jehoiakim, Zedekiah, Jehoiachin, Nebuchadnezzar, Evil-Merodach, Neriglissar, Labashi-Marduk, Nitrocris, Belshazzar, Cyrus, and Darius—these kings had written the textbooks on bloodshed and oppression. No doubt God’s people were conditioned to think that they had little hope; that the best they could expect was to remain oppressed objects of another’s power and manipulation and anger. What other kind of king was there?

Evidently, another option did exist. Zechariah 9:9 offers the hopeful glimpse: “Rejoice greatly,” the prophet declares, “O daughter of Zion! Shout aloud, O daughter of Jerusalem! behold, your king is coming to you; righteous and having salvation is he, humble and mounted on a donkey, on a colt, the foal of a donkey.” That this coming king would come on a donkey, a symbol of peace, as opposed to the typical horse-of-war, gives immediate notice that he will be very different.

And just how different would he be? To answer that we have to fast forward through the centuries, to the very week that this prophecy was fulfilled. On March 30, 33 AD, amidst shouts of triumphant praise, the waving of palm fronds and the spreading of beautifully woven blankets, Jesus the Messiah rode into Jerusalem on a colt, the foal of a donkey. Not only did this event fulfill to the very day the ancient prophecy given by Daniel of the “coming of Messiah, a prince” (see Daniel 9:25), it also fulfilled the prophecy of Zechariah 9:9. Consider the story as told by Matthew in the gospel narrative bearing his name:

Now when they drew near to Jerusalem and came to Bethphage, to the Mount of Olives, then Jesus sent two disciples, saying to them, “Go into the village in front of you, and immediately you will find a donkey tied, and a colt with her. Untie them and bring them to me. If anyone says anything to you, you shall say, ‘The Lord needs them,’ and he will send them at once.” This took place to fulfill what was spoken by the prophet, saying,

“Say to the daughter of Zion,
‘Behold, your king is coming to you,
humble, and mounted on a donkey,
on a colt, the foal of a beast of burden.’”

The disciples went and did as Jesus had directed them. They brought the donkey and the colt and put on them their cloaks, and he sat on them. Most of the crowd spread their cloaks on the road, and others cut branches from the trees and spread them on the road. And the crowds that went before him and that followed him were shouting, “Hosanna to the Son of David! Blessed is he who comes in the name of the Lord! Hosanna in the highest!” And when he entered Jerusalem, the whole city was stirred up, saying, “Who is this?” And the crowds said, “This is the prophet Jesus, from Nazareth of Galilee.” (Matthew 21:1-11)

The King had arrived in his capital city—the prophecies fulfilled, and peacefully nonetheless. But then things turned very dark. Violence arose yet again. Hatred was stirred. Brutality descended upon the city. But this time it was not from the king to the populace. With Jesus a most unusual thing happened. Rather than directing violence and oppression against the crowds, the crowds directed it toward him. Indeed, to fulfill the prophetic words of yet another ancient voice, “He was oppressed, and he was afflicted . . . he poured out his soul to death” (see Isaiah 53:7, 12). Not quite a week after he arrived to the sounds of triumphant praise, the promised king met a violent end on a rugged cross—crucified. Typical of the ancient kings, violence ruled the day. Except this time it was violence that King Jesus absorbed rather than meted out. The prophet Zechariah hints at this as well, telling us that Jesus would be one “whom they have pierced” (Zech. 12:10), a poignant reference to the process of crucifixion.

Here is the question: if the kings of old ruled violently to ensure their power and position, what was the effect of all the violence directed to the King of Promise? And the answer can be found in Zechariah’s ancient script. The prophet of old declares in Zechariah 13:1 the following: “On that day there shall be a fountain opened for the house of David and the inhabitants of Jerusalem, to cleanse them from sin and uncleanness.”

To cleanse . . . from sin and uncleanness? Well that is what makes the One True King so utterly remarkable; so very different from any other. His own words make it clear: “For even the Son of Man came not to be served but to serve, and to give his life as a ransom for many” (Mark 10:45). By his stripes we were healed (cp. Isaiah 53:5).

“Write This Down” is a summary of select teaching moments offered by Pastor Matthew. The preceding summary is from “Your King is Coming”, a Palm Sunday message, presented on the weekend of March 24, 2013, at Bethel Church.

The more margin you have, the more opportunities you can seize.

The older I get, the more I think kindness is important. And true friendship.

In the car of our lives, feelings make wonderful passengers but horrible drivers.