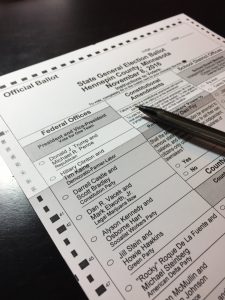 My mail-in ballot for the 2016 election is resting on the desk in front of me. It has been sitting there for about four days while I have fretted and prayed and prayed and fretted over what to do. Today I find my eyes misty, with grief over our national drama pushing the tears forward. If I may be very direct, I preferred a different candidate for the Democratic nominee. And, I preferred a different candidate for the Republican nominee. Who we have today on both sides are by no means my first choices. Not even close. The drama that is always swirling around each candidate appalls me. I abhor the condescension from the one, and the disgusting misogyny of the other sickens my stomach. And those are just a couple of the concerns I have with these two individuals.

While I continue to dither over my own empty ballot, there are three truths about this election that I cannot shake. Indeed, I must not and neither should you, especially if you are a disciple of Jesus. They are as follows.

First, our Heavenly Father is in complete control of the matters of time and space. There is nothing unfolding in our national narrative that surprises him or is beyond his reach. Indeed, in his providence, he raises up leaders and pushes them aside. Even the brutal Nebuchadnezzar recognized this, declaring in Daniel 4:17 that “the Most High rules the kingdom of men and gives it to whom he will and sets over it the lowliest of men.” The Apostle Paul, centuries later, affirms this timeless reality, writing, “there is no authority except from God, and those that exist have been instituted by God” (Romans 13:1). There is so much banter in the public square about how disciples of Jesus ought to approach this election. It seems to me a foundational consideration is to remember that while our privileged participation in the election process is vital, in the end our Heavenly Father is the one who raises up leaders and puts them down.

Secondly, the truer “sin” with one’s vote is that one violates his or her own Spirit-influenced conscience. Now this assumes, based on my language, some sensitivity to the Holy Spirit’s counsel regarding whether to vote or how to vote. But assuming that conscientous people are leaning into the wisdom of God’s Spirit, shaped by the counsel of God’s Word, and this describes most of the people I know, then let us stop denigrating those whose expressed political leanings are different than ours. Disgraceful is the word to describe the vitriol between many evangelicals regarding their expressed opinions, with some suggesting that evangelicals who vote for one or the other candidate will not inherit God’s kingdom or are only about power and control or are comprising with the devil, and so forth. Seriously? One page to the right from the Apostle Paul’s reminder that no authority exists except from God is an exhortation to steward one’s own conscience well. “Blessed is the one who has no reason to pass judgment on himself for what he approves,” the apostle pens. “But whoever has doubts is condemned [if it] is not from faith. For whatever does not proceed from faith is sin” (Romans 14:22-23). If we are intellectually honest, we all know extremely thoughtful, conscientious, and godly people on all sides of the political matrix who are desperately seeking God’s face regarding what to do. Normally, the answers are not easy, and they certainly are not during this particular election cycle. In circumstances like ours, with the complexities being what they are, it is incumbent upon us to heed the apostle’s statements in Romans 14:10-13, wherein he writes, “Why do you pass judgment on your brother? Or you, why do you despise your brother? For we will all stand before the judgment seat of God; for it is written, ‘As I live, says the Lord, every knee shall bow to me, and every tongue shall confess to God.’ So then each us will give an account of himself to God. Therefore let us not pass judgment on one another any longer. . . .” A vote for one or the other candidate may be a poorly cast vote; one that lacks wisdom. But it does not mean it is inherently sinful, particularly for the person who is working in good faith before the Father. In this matter the truer “sin” is the violation of one’s conscience, not the choice actually made. This calls for wisdom, and for charity.

Thirdly, respect for the one God places over us is requisite. I wonder if evangelical outrage for either Hillary Clinton or Donald Trump will ultimately give way to holy honor, a la Romans 13:7-8, which reads, “Pay to all what is owed to them . . . respect to whom respect is owed, honor to whom honor is owed. Owe no one anything, except to love each other, for the one who loves another has fulfilled the law.” I suspect the answer to that question will be the real test of gospel-oriented living during this particular election process. These are hard words in our divisive time. But they are hard words for how disciples must relate to those God puts on earthly thrones. Of course, in our republic, we have the privilege of being political activists, we can cast ballots, we can petition legislators, and so forth, and this is a wonderful opportunity for us that many nations do not have. Yet in the end, all of our privileged activism must give way to honor and respect for our authorities. Will you offer genuine honor and respect and prayerful intercession for our new president, even if that one did not receive a vote from you?

I am continuing to wrestle with what to do with the ballot in front of me right now. But three things I do know. God is in charge, and his say is final. I must respond to what my Spirit-shaped conscience dictates, and offer charity to those whose choices differ from mine. I must honor the candidate that is victorious, if only because my Lord, in his written revelation, has commanded me to do so.