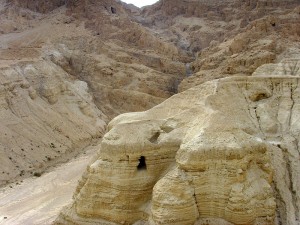 Psalm 145:1 and following offer a marvelous portrait of praise to the Most High God. Penned by King David, and the last of the psalms attributed to him, it honors the Lord for his kindness to his people. Like a number of the psalms, it is written with an acrostic structure, meaning that each verse corresponds to a descending letter in the Hebrew alphabet. But with this psalm there is a problem. Throughout time one of the letters has been missing, suggesting that some line originally found in the psalm had somehow fallen out. The letter in question was the Hebrew “nun,” or “N,” which would have been located between Psalm 145:13-14. Being that the whole of Psalm 145 is about praising God, we can imagine that some unique detail regarding gratitude and praise was no longer available.

This absence perplexed Bible scholars for ages, until the wonderful discovery by a Bedouin shepherd of the Dead Sea Scrolls in 1946. As these all-important scrolls were collected and analyzed—scrolls dating back to two or three hundred years before Jesus walked the dusty trails of Galilee and Judea—the missing “nun” was recovered; the line which had somehow dropped out was found, etched ever-so-carefully into a more ancient rendering of this precious psalm. It reads:

And how true this statement is! The very fact that this line of holy writ was rediscovered after centuries of being lost testifies to the very truth embedded in the line’s words—the Lord is faithful. . . .

Do you believe the Lord is faithful in all of his words and works? Is your life like this psalm—a seemingly well-structured story with one glaring, missing piece—confidence in God’s steadfast faithfulness? Right now is as good a time as any to stop and ask yourself if you are resting confidently in the Lord’s faithfulness to you. Search your soul to see if you are more doubtful than trusting, more resistant than restful, more anxious than amazed.

Check to see if there is a line missing in your story. And if there is, play the Bedouin shepherd, stumble into the cool cavern of God’s truth, and dig up the ancient piece that needs to fit ever-so-tightly into your story; that piece that declares God is faithful . . . to you.