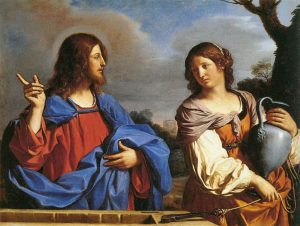 With deep resolve Jesus moved past the safer route home known as the King’s Highway. It would have been more comfortable, but it would not have afforded Jesus the opportunity He wanted to embrace—an opportunity more likely found in a little known hamlet of Samaria called Sychar.

Many eyebrows must have been raised as Jesus approached this quiet Samaritan town. After all, Jews did not go through Samaria; it was unheard of. No respectable Jew would dare travel through that region, but then Jesus was no respectable Jew. He was more interested in transforming people’s lives than maintaining the status quo. With twelve men in tow, He approached Sychar with a sense of mission. He wanted to step away from the comfortable world of first-century Jewish self-absorption and extend a hand to the despised.

Directing His disciples toward the town square to find some lunch, Jesus rested in the shade offered by the trees around an ancient watering hole constructed by the patriarch Jacob. Since it was about noon and the day was hot, Jesus could expect some moments of quiet, for no one usually went to the well at high noon. Of course, as described in John 4, on this day a Samaritan woman did approach the well. The opportunity that Jesus sought began to unfold.

“Whoever drinks of the water that I will give him will never thirst,” Jesus tells the woman. And with those enigmatic words a discussion ensued in which Jesus lovingly and honestly identified the woman’s messed up life, and followed up by offering her the hope of salvation. In the end, she believed Jesus, and ran to town declaring the Good News she has embraced. Ultimately, the little village hidden within Samaria was transformed.

As 2017 begins would you join me in a very important pursuit? Let us reach out to the marginalized and seemingly forgotten people in our lives. The thing that will surprise you is how sophisticated these people will be, and how close to you they really are. Looking at Jesus’ gentle way with the Samaritan woman offers some clear clues toward doing this well. Consider the following.

Like Jesus, intentionally move toward those beyond your comfort zone. Take someone from another culture to lunch or to a ballgame. Ask to be seated in the section where the new waitress is working. Read the nametag of the man behind the cash register, and use it when saying “thank you” or when asking about his day. When your neighbor is working in the yard, go out and greet him. Or maybe you could work a regular shift serving a meal at a local community center, such as New Hope Church’s HopeBridge Center.

Gently offer truth when the opportunities present themselves. When your fellow student complains that there is no way to pass the test, ask her if you could pray with her. When the distraught plumber waxes on about his broken marriage, look him in the eye and ask him if anyone has ever told him about Jesus. Then ask if you can tell him. Then tell him.

Be winsome. Too many Christians look and sound like they have stomach viruses. But Jesus’ interaction with the Samaritan woman suggests that He had an incredibly kind and charming way about Him. He and His words captivated her. Kindness and Christ-like love have a way of disarming someone and instilling in them a desire to hear what can be said. As the new year begins to roll along, let’s put ourselves forward into our realms of influence as Jesus did in Sychar. And then let’s watch what the Holy Spirit will do! I’m convinced we’ll be amazed by what we see.