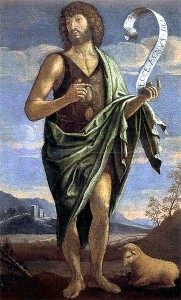 To be associated with Jesus is costly. There is not a neat and tidy association with him. We see that even among his own family and friends Jesus himself had a hard time (cp. Mark 6:1-6). We see that Jesus, quite aware of the toll following him may take on his disciples, prepares his followers for opposition when he tells them “if any place will not receive you and they will not listen to you, when you leave, shake off the dust that is on your feet as a testimony against them” (Mark 6:11).

And then there is death— martyrdom. There is Jesus’ own death on a cross. And there is John the Baptist’s story. Consider his account penned by Mark:

King Herod heard of it, for Jesus’ name had become known. Some said, “John the Baptist has been raised from the dead. That is why these miraculous powers are at work in him.” But others said, “He is Elijah.” And others said, “He is a prophet, like one of the prophets of old.” But when Herod heard of it, he said, “John, whom I beheaded, has been raised.” For it was Herod who had sent and seized John and bound him in prison for the sake of Herodias, his brother Philip’s wife, because he had married her. For John had been saying to Herod, “It is not lawful for you to have your brother’s wife.” And Herodias had a grudge against him and wanted to put him to death. But she could not, for Herod feared John, knowing that he was a righteous and holy man, and he kept him safe. When he heard him, he was greatly perplexed, and yet he heard him gladly.

But an opportunity came when Herod on his birthday gave a banquet for his nobles and military commanders and the leading men of Galilee. For when Herodias’s daughter came in and danced, she pleased Herod and his guests. And the king said to the girl, “Ask me for whatever you wish, and I will give it to you.” And he vowed to her, “Whatever you ask me, I will give you, up to half of my kingdom.” And she went out and said to her mother, “For what should I ask?” And she said, “The head of John the Baptist.” And she came in immediately with haste to the king and asked, saying, “I want you to give me at once the head of John the Baptist on a platter.” And the king was exceedingly sorry, but because of his oaths and his guests he did not want to break his word to her. And immediately the king sent an executioner with orders to bring John’s head. He went and beheaded him in the prison and brought his head on a platter and gave it to the girl, and the girl gave it to her mother. When his disciples heard of it, they came and took his body and laid it in a tomb. (Mark 6:14-29 ESV)

There is much to be said. For instance, one could highlight the remarkable parallel that this story is to Jesus’ own death: a weak ruler manipulated by the persistent hatred of others for a righteous and holy man yields to pressure and orders a death that is not called for. We can affirm that this is a foreshadowing in so many respects of Jesus upcoming passion. But perhaps the best thing to do right now is focus on the cost of some kind of relationship to Jesus. When it comes to John the Baptist’s experience three ideas readily come to mind, and these have serious implications for you and me who follow Jesus.

First, when called to do so a disciple of Jesus must confront sin and unrighteousness. Notice, I am careful to declare that this must be when called upon by the Lord to do so. There was no end of wickedness taking place in John the Baptist’s day, but he did not confront all of it. He did, however, have a sense that he should address the sin in Herod’s life. Such he did boldly. Of course, this begs a question for you and me: is there unrighteousness in our realms that we must confront? What might keep you from doing so?

Secondly, when doing the right thing to which we are called, hatred may come our way. No doubt John the Baptist pursued the right thing; this, however, did nothing but gain him animosity. We may gain enemies. Sometimes these might be family members. Sometimes these might be close friends. We might be harassed at work or at school or in our community. Because we love Jesus and wish to honor his name, even our very lives might be at risk—a phenomenon that is very real around the world even today. Jesus said is John 15:18 that if “the world hates you, know that it has hated me before it hated you.” This is a reality for many disciples; one not easily avoided.

Thirdly, there is little earthly reward for God’s servants. Eminent scholar J. C. Ryle wrote that “the last fruit that John the Baptist reaped in return for his labor” was “an unjust imprisonment and a violent death” (Ryle, Mark, p.89). The Apostle Paul wrote that “the sufferings of this present time are not worth comparing with the glory that is to be revealed to us” (Romans 8:18). Many people are duped into believing that Christianity is all lollipops and lady bugs, something easy, clean and nice. Not so! It is difficult and painful and designed in part to remind us that our hope lies beyond the grave. [Tweet “What we may get today for our faith is death, and for some, that will actually be a blessing.”]

There are two additional thoughts to consider. One relates to the general persecution of Christians around the world. The American Church is so insulated from the reality of persecution that we rarely consider it. We must sensitize ourselves to this fact, however, and commit to pray. Commit yourself to understand the plight of Christians around the world, and learn to pray for them and with them. The other thought relates to the cost paid by King Herod. Perhaps you are a skeptic like him, deeply interested in spiritual matters but unwilling to let the Lord transform your life. Are you prepared to let such unbelief cost you eternal life?

“Write This Down” is a summary of select teaching moments offered by Pastor Matthew. The preceding material is from the message “The Cost,” part five of the sermon series entitled, “Piercing the Darkness,” presented on the weekend of November 3, 2013, at Bethel Church.