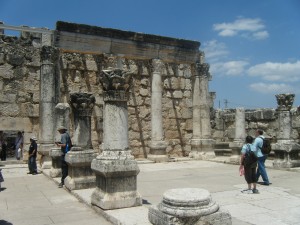 We could go on and on.

Mark 5:21-43 vividly continue this theme (click on the link and read the passage carefully). It’s three movements heighten the drama, stirring tension, leaving the reader wondering if Jesus will come through yet again. Of course, he does. Perfectly, and we are awed.

There are at least two important ironies within the text. Jairus’ daughter is twelve years old, and the woman in the story had been bleeding for twelve years. As an influential synagogue ruler in Capernaum, Jairus no doubt ignored the bleeding woman, if he had even noticed her at all; after all, the bleeding woman was ceremonially unclean and probably had “sinned” in some manner to merit such an atrocious scenario. It seems evident that toward his own daughter, during her own potential uncleanness (death), Jairus gave no end of affection. [Tweet “Our religious scruples blind us to needs around us, but are set aside when needs become personal.”]One more noteworthy irony is that Jairus would reach out to Jesus at all. Prior to his own felt need (his daughter’s sickness), he likely  joined the religious elite in plotting “to destroy him” (Mark 3:6).

Jesus assures Jairus that he will proceed with him to help his daughter. On the way he is sidetracked by the bleeding woman’s faith-fueled touch. Her options are few, she has evidently tried everything but to avail. Now, in one last effort for help, she, despite her religious uncleanliness, moves through a thick crowd and forces her fingers forward to brush Jesus’ cloak as he passes by. Instantly, she is healed—the bleeding stops and she is well. She knows it.

And so does Jesus, but he does not want her to slip back into the crowd without some personal moment between him and her. “Who touched my garment?” he asked (Mark 5:30), provoking snickers among his disciples. She cautiously steps forward and he tenderly reminds her that her faith has made her well (5:34). Meanwhile, Jairus’ daughter has died.

Leaving the woman Jesus moves onward to Jairus’ home, moves past the professional mourners who are only there for a shekel or two, and, with only a few of his close disciples present, raises Jairus’ daughter to new life. “And he strictly charged them that no one should know this, and told them to give her something to eat” (5:43).

So a question begs to be asked. Which one of these kinds of people are you? Are you like the cursing sailors filled with fear because you have been stretched to the limits and are living a life beyond your ability to now control?

Are you like the man with the many demons, eager for help (notice how he did run down toward Jesus in Mark 5:6) but held hostage by forces that have long hogtied you to their power?

Are you like the sophisticated ruler who thinks he has all of life properly figured out, only to find when things get personal you really have nothing at all?

Are you like the little girl—dead? Or at least you feel dead.

Are you like the bleeding woman, a throw-away, ignored, abused, dismissed, forgotten; desperate for a touch of hope?

And where you are, he brings himself, so do not fear. Only believe!

“Write This Down” is a summary of select teaching moments offered by Pastor Matthew. The preceding material is from the message “Do Not Fear; Only Believe!”,  part four of the sermon series entitled, “Piercing the Darkness,” presented on the weekend of October 20, 2013, at Bethel Church.