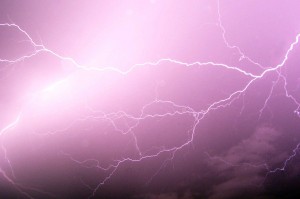 I love that moment on the rolling sea when Peter steps out toward the beckoning Jesus. “Come,” said Jesus, to his feisty friend. And Peter, according to Matthew 14:29, “got out of the boat and walked on the water and came to Jesus.” Unbelievable! What courage and zeal on Peter’s part. That he would even lift his foot over the wooden side of the rain-soaked boat toward the raging water ought to cause us all to pause with utter admiration. Lifting my foot would have probably not crossed my mind. Insecure laughter maybe, but no foot-lifting.

If only Peter had starved his eyes, however. You see, he wasn’t but just a few paces out, fixated on his master Jesus, when he allowed his eyes to drift toward something that would take him down. Verse 30 says it plainly: But when he saw the wind, he was afraid, and beginning to sink he cried out. . . .

To see the wind was to see the storm as a whole (“wind” serves as a synecdoche for the entire storm). The spray of the water, the angry clouds, perhaps bolts of lighting carving their way through the darkened sky, the rolling waves—all of these were shouting at Peter, swatting at him, teasing and mocking and shaming him into removing his attention from the One who had invited him to walk on the glassy billows. Storms can do this. They can utterly distract, demoralize, even destroy. Starving the eyes (“eyes” serves as a synecdoche for the soul within us) so they stray not toward the blustery gales of life is a good practice.

No-fly zones in Libya. Tragedy in Japan. Bloodshed in Bahrain. A diminishing dollar. It seems the world is falling apart. Honestly, it can be frightning at times, every tear shed in Sendai and every bullet spent in Benghazi pulls at our hearts, elevates our senses, and makes us to question the world as we know it. Why the intensity? Why the drama? Why the exponentially growing chaos, swatting at us, teasing us, mocking us, and causing us to turn away from the One who calls us to trust?

But Matthew 14:31, thankfully, tells us the rest of the story. “Jesus immediately reached out his hand and took hold of Peter, saying to him, ‘O you of little faith, why did you doubt?'” Keeping our eyes on Jesus helps us to keep the fearful things from getting the best of us. And Jesus himself has made it clear if we will only trust in him we will keep steady.

Even on the angry seas.