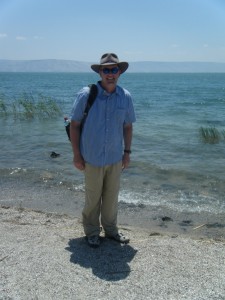 When Jesus gets hold of us he wants to not only change our lives but the world in which we live. Consider the story as told in the Gospel of Mark:

He went out again beside the sea, and all the crowd was coming to him, and he was teaching them. And as he passed by, he saw Levi the son of Alphaeus sitting at the tax booth, and he said to him, “Follow me.” And he rose and followed him.

And as Jesus reclined at table in Levi’s house, many tax collectors and sinners were reclining with Jesus and his disciples, for there were many who followed him. And the scribes of the Pharisees, when they saw that he was eating with sinners and tax collectors, said to his disciples, “Why does he eat with tax collectors and sinners?” And when Jesus heard it, he said to them, “Those who are well have no need of a physician, but those who are sick. I came not to call the righteous, but sinners.” (Mark 2:13-17)

Modest as it is, this passage is packed with meaning, beginning with Jesus’ walk along the shore of the Sea of Galilee. Not only does that walk follow a pattern in the Gospel of Mark whereby Jesus, on the heels of some dramatic work steals away for some measure of solitude, but the reference to the sea hints toward the “wicked” who are “like the tossing sea” (see Isaiah 57:20) as well as the pending dramatic episodes on the Sea of Galilee in which Jesus demonstrates the fuller scope of his authority and power (cp. Mark 4:35-41; 6:45-52). The sea nearly teases us with its presence.

The time frame is indiscernable. Clearly it follows the events of Mark 2:1-12, but the specifics cannot be found. What is evident is that for however long the period is, people are coming to Jesus and he is teaching them. They ebb and flow into his orbit much like the waves hitting the sand near his feet. Perhaps Levi the Tax Collector saw and heard elements of this. At some point, as Jesus passed by where Levi’s tax office was situated, he called for him to follow after Jesus (literally, “walk the same road with me.”). Without hesitation Levi did so.

We cannot miss the idea that following Jesus took Levi right into the heart of his own personal realm of influence, at least initially. So it is that Mark 2:15-17 finds Jesus essentially hosting a supper at Levi’s house, to which place Levi has invited his friends and colleagues. That Jesus is singled out as he is implies that while Levi is the generous donor Jesus is the actual host. This hints toward Jesus as the Messiah hosting the redeemed.

The tax collectors and sinners suggest a common group. Tax collectors like Levi were perceived as not much more than scum in that society. Their role as contract-representatives of either the local Herodian government or the Roman officials caused them to gain much financial power on the backs of their neighbors, and the association with these rulers essentially stripped them of common rights such as genuine civic leadership and participation in the synogogues. They were greatly disdained. The so-called sinners, at least in the eyes of the religious elite, were not much better. These were not true sinners in the sense of utter evil; rather, these were generally common folks like you and me who did not follow the strict relgious code as intepreted by the Pharisees. It would be a mistake to see the “sinners” as the quintessential thieves and rapists. Rather, they were a composite of anyone not tracking with the religious duties of the day. Of course the combination of tax collectors and these religious outcasts associating with Jesus, and he with them, utterly unnerved the Pharisees and their legal scholars (the scribes). Thus they pulled Jesus’ disciples aside and inquired of this association. In their minds a genuinely righteous rabbi would never associate with such people.

Jesus’ statement about the physicians going to the sick and not the well was a common quip of the day; understood by everyone. His words were meant to be a rebuke of the scribes of the Pharisees who in their self-righteousness were utterly oblivious to their real spiritual need. At the same time, however, the “sick” were quite aware of their own mess and hungered for a remedy. Their willingness to receive Jesus’ company suggests as much.

Three observations merit attention. First, I would submit that in keeping with Mark’s words in Mark 1:2 where he writes, “As it is written in Isaiah the prophet,” the tone of this story echoes some of the sentiments from Isaiah 57:14-21, wherein we find a possible type for Levi and all Levi represents, as well as the scribes, in the words “Because of the iniquity of his unjust gain I was angry, but he went on backsliding in the way of his own heart. I have seen his ways, but I will heal him; I will lead him and restore comfort to him and his mourners, creating the fruit of the lips. Peace, peace, to the far and to the near,” says the LORD, “and I will heal him. But the wicked are like the tossing sea; for it cannot be quiet, and its waters toss up mire and dirt” (Isaiah 57:17-20). If I am correct regarding this passage then we have yet again telling evidence that Jesus is God’s provision to restore and comfort his chosen people Israel, as well as others who would believe upon him.

Secondly, we cannot overlook passion Jesus has for those who are outcasts. Are you in that category? Are you someone who has been forgotten, ignored, dismissed, seen as spiritually corrupt or insignificant? Please note that in a world where Jesus could have spent an inordinate amount of time hobnobbing with the religious elite, what he chose to do instead was connect with the outcasts of society.

Lastly, notice the unique role that Levi played. Jesus called him to walk the same road as Jesus. And Levi essentially follows Jesus right back into Levi’s very own world, with Levi’s friends and co-workers, in Levi’s own home, leveraging Levi’s resources and so forth. What are the implications of this for you? Jesus did not merely make an evangelistic presentation and move on. He engaged, he spent time with, he connected with Levi and Levi’s associates. We should do no less in our own world.

“Write This Down” is a summary of select teaching moments offered by Pastor Matthew. The preceding summary is from the message “Converse Where You Live!”, the eleventh message from the series entitled “Jesus, God’s Beloved Son,” a study through the Gospel of Mark, presented on the weekend of February 24, 2013, at Bethel Church.