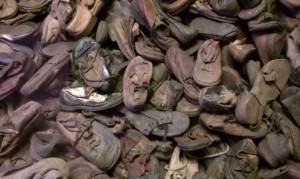 One of the most haunting and remarkable experiences I have ever had was quietly walking along the well-worn pathways of the Nazi death camp called Auschwitz, about an hour west of Krakow, Poland. If you stood still long enough, and closed your eyes, you could almost hear the muffled cries of the little Jewish boys and girls, as well as the shrill tones of the sadistic Nazi guards. I had studied the Holocaust since I was a little boy, and read reams of material about Auschwitz and Himmler’s “Final Solution.” To be there was simply surreal.

Just months before I had the distinct privilege of touring the Yad Vashem Holocaust Museum in Jerusalem. There, one gets to walk through a panorama of events unfolding the tragic story of the Jewish people’s nightmare. In retrospect I can see how it teased me to want, or perhaps need, to actually visit Auschwitz. It is one thing to see a replica of the entry gate at Yad Vashem. It is another thing to actually walk through the original one there in Poland.

Here we are now seven decades removed from the Holocaust (Auschwitz was liberated seventy-one years ago today). In some ways it seems so distant, somehow as if it were in an entirely different dimension. In other ways it seems like something that happened yesterday, and like something that will happen tomorrow (see, for instance, the unfolding events in Syria or the mass extermination of babies in the wombs in the United States). Were you to ask a couple of my Israeli friends who have few or no living relatives in the generation or two immediately above them, because they all died in the death camps, the Holocaust is something that is as real as their very breath.

And pray it never happens again.

Being a jerk to everyone you think is wrong about stuff is not a mark of orthodoxy or courage but of arrogance and fear.
The saints used to pray for "mellowness of soul." This is a good prayer.