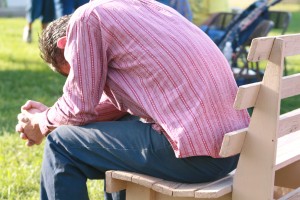 Jesus’ early-morning trek to an out-of -the-way spot so that he might talk with his heavenly Father offers some important lessons regarding both prayer and purpose. Consider the passage, as revealed in Mark 1:35-39:

And rising very early in the morning, while it was still dark, he departed and went out to a desolate place, and there he prayed. And Simon and those who were with him searched for him, and they found him and said to him, “Everyone is looking for you.” And he said to them, “Let us go on to the next towns, that I may preach there also, for that is why I came out.” And he went throughout all Galilee, preaching in their synagogues and casting out demons.

It is first to be observed that it was dark, which could have a metaphorical ring to it, every bit as much as being a mere time stamp. The actual time frame is probably around three in the morning; maybe four. One might rightly assume that his sleep was rather short, having spent time into the late hours healing the sick and casting out demons (see Mark 1:34). That he would rise so early fresh after those efforts says something very telling about the importance and necessity of prayer.

It should also be obesrved that Jesus “went to a desolate place.” This is a fascinating entry, for the landscape surrounding Capernaum was not necessarily barren like the wilderness in which Jesus faced his great temptations (see Mark 1:12-13). Indeed, much of the countryside around Capernaum was well-cultivated. The phrase “desolate place” may possibly, like the time reference alluded to above, have a metaphorical ring to it. It may be a statement about the isolation Jesus feels as well as the value of finding privacy for communion with God. Moreover, it may well be an antitype for Moses’ movement away from the camp of Israel toward the Tent of Meeting at which place he would commune privately with God (Exodus 33:7 says, “Moses used to take the tent and pitch it outside the camp, far off from the camp, and he called it the tent of meeting. And everyone who sought the LORD would go out to the tent of meeting, which was outside the camp.”). If the antitype idea has merit, then Mark is making a huge statement about Jesus’ role as the “prophet like [Moses]” (Deuteronomy 18:15 and following) who cares for God’s people in the wilderness.

Of course, in the desolate place to which Jesus went “he prayed,” an imperfect, middle deponent verb implying the earnestness with which Jesus prayed, as well as the nature of his personal participation in his conversation with God. Jesus was no mere recipient of God’s time; rather he and God engaged in conversation together, with Jesus having a very active role in the discussion (thus, the middle deponent voice in the ancient language). One gets the impression that Jesus was quite animated in his conversation with God. The grammer certainly implies such.

On the heels of Mark’s description of Jesus’ time with his Father, Simon Peter and some others find Jesus and essentially scold him for having disappeared. “Everyone is looking for you,” they say to Jesus, implying that Jesus was missing an opportunity to connect with the community; perhaps letting the community down. Jesus’ easy dismissal of their concern, and his affirmation that they must go to still other towns wherein Jesus might “preach . . . for that is why I came out,” gives us a strong glimpse into what it was Jesus was praying, and this is very, very important: prayer afforded Jesus the opportunity to affirm his unique mission and purpose. In an environment in which many sought to frame the terms of Jesus’ calling (miracle worker, healer, religious or political revolutionary), Jesus got with his Father to ensure he stayed on mission, even if such divine purpose violently clashed with worldly expectations and even comforts, for giving into the crowds’ expectations may well have been easier than going to the cross.

Which, therefore, leads to some important take-aways. First, perhaps more than anything else the primary point of prayer is to establish and affirm the Father’s purpose and mission for our lives. While intercession and even adoration are important features of a life of prayer, these lose meaning if we do not first tap into God’s unique demands for our own souls.

Secondly, we must remember that there will be times when God’s unique call in our lives will violently clash with the expectations of others or, perhaps, of our own self-interests. This may be costly, but our willingness to embrace this dynamic will speak volumes about the nature of our obedience and dependency upon God.

Lastly, we must be confident in the fact that God clearly welcomes our persistence in prayer. The grammer suggests that Jesus could be accused of being pushy with his Father when it came to affirming his mission and purpose. He was quite determined to stay within God’s exclusive and sovereign will for his life. That he was so animated speaks volumes about his earnestness in this regard, and the same will be so for us.