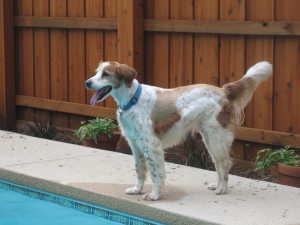 Thankfully it is from the likes of General Norman Schwarzkoph that I find myself having permission to cry uncontrollably if needed. When asked years ago by Barbara Walters how it was that the great general would cry when talking about his troops he, with star-bedecked shoulders and stout chest declared, “I am scared of a man who does not cry.” His whole point, I understood, was that such a man would be one terrible man indeed.

Well, I’ve spent most of the past three days crying (privately, of course, when dignity would require such while at the office) because my beloved Rev. Richard Baxter St. John–also known simply as “Baxter,” or “the Pooch,” or “the hairy beast in the backyard,” or, as my dear friend Joe Williams calls him, “the smartest dog in the backyard”–died in my trembling arms Monday morning at the local veterinarian’s clinic.

Baxter was thirteen, or, in dog years, ninety-one.

Should you have stumbled over the name of this precious gift from Abba, then note that one of my heroes is an old, somewhat controversial Puritan divine name Richard Baxter. When this orange and white Brittany arrived in our family around the beginning of 1996, I named him after this Puritan sage.

Just for fun. Out of respect. Amidst the laughter and perplexity of my friends.

Found in a snowstorm in late 1995 at about six weeks old, Baxter relished the life of a rescued and protected and playful dog. He brought more joy to our family than any blog could worthily describe.

And much laughter. Like the time he protected our entire family from the really scary bag of mulch that had been left sitting on the back porch. By the time Baxter was done with the threatening bag, shreds of white plastic wrap and black soil were strewn all over the backyard. His freckled face had become black. He looked like one of the dancing chimney sweeps from Mary Poppins.

Then there was the time that this bird dog snared a baby duck that had wandered from a neighbors’ backyard. The duck didn’t last long (Baxter’s instinct kicked-in). But boy was he proud when he delivered it ever so carefully at my feet, a trophy from a moment in time when the weaker of God’s creatures fell to the stronger.

And, of course, the thousands of moments when after a long, hard day, I’d arrive home and find his gentle greeting to be a catharsis from the toil and hurt that often comes with the life of a pastor.

And then there were the many times that this lanky canine would climb up in my lap and nuzzle his muzzle under my armpits as if to offer a very personal hug to his Alfa King (that would be, of course, me). This he did just before I tucked him in last Thursday night. I hugged him back, kissed him on his nose, and closed the door to the comfortable cage he’s called home for thirteen years. Little did I know it would be my last hug; the last time I’d close him into his den.

I left Friday morning for a trip to Dallas. He seemed fine with the gals while I was gone. Indeed, he bravely protected them from the snowfall, and followed them around hoping for crumbs to come crashing to the floor. All seemed somewhat well for this old, tired, and arthritis-ridden dog. Christa even said he wandered all over the house during the weekend looking for, well, me.

Early Monday morning, after arriving about 11:30 pm Sunday from my excursion away, I went to let him out of the cage. He couldn’t walk. He couldn’t move. He simply sprawled out on the floor and looked at me as if to say, “Can I get in your lap and nuzzle my nose in your chest?”

I picked him up, and held him there, even as I drove him to the vet.

And held him more. And then he went to doggie heaven.

Agnes Sligh Turnbull once said, “Dogs’ lives are too short. Their only fault, really.” I wholeheartedly agree. Indeed, every moment that I’ve interacted with Baxter throughout the thirteen years, short as they really have been, I have seen a glimpse of God’s unconditional, doting, faithful, playful, risky, and tender love. I’ve seen grace on display.

No wonder God loves his creation so much. It reveals, in vivid movements and sighs and colors, well, you know, God.

Perhaps that among most things is why Baxter’s passing hurts so badly. When he was around I somehow felt as if Jesus were there.