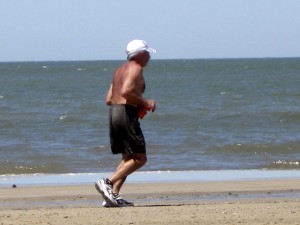 My friend and theologian/pastor Cornelius Olowala, a Nigerian man who for many years was the president of the Evangelical Church of West Africa, a multimillion member evangelical denomination, once offered a striking commentary on America that I have not gotten over. “In Africa,” he said, “our older people are revered while in America they are reviled. In Africa, older people are our sages, while in America they are put on the sidelines. In Africa, the elderly are people of tremendous influence and we take care of them. In America, they are ignored, shoved aside, seen as in the way.” I was ashamed because in general terms he was exactly right.

There is a common template regarding the elderly in America, and western society in general. It follows along these lines: the elderly are relegated to the dull existence of a life playing golf or gambling at places like The Villages or Vegas. “Shuffleboard” is the quintessential trademark of the aged in our culture today. And if this option isn’t available, the other is: the elderly are assigned a quiet spot in the corner where they fade away, in anonymity and silence, into oblivion.

Surely we can do better than live along the edge of these western stereotypes.

Abraham, from the Bible, is an example of someone who foils our understanding of such stereotypes. It is said of him in the Book of Hebrews that he “obeyed God when he was called to go out to a place that he was to receive as an inheritance . . . not knowing where he was going” (Hebrews 11:8). What is remarkable is that such an act of faith was when he was seventy-five years old, and by all accounts, and certainly our good American standards, should have stayed home and lived out a comfortable and quiet existence.

Life was good in Haran. Located in the mountains in what is present-day eastern Turkey, there was every reason in the world for Abraham to remain there. And yet God, ever-on-the-move, tapped Abraham on the shoulders and invited him to set his sights higher than the so-called easy life of an aged man. Genesis 12:1 finds God confronting Abraham (called “Abram” in the early accounts) and commanding him to move “to the land that I will show you.” Genesis 12:4 offers the complete summary of Abraham’s response: So Abram went, as the LORD had told him, and Lot went with him. Abram was seventy-five years old when he departed from Haran.

But at seventy-five shouldn’t he have been allowed to stay put. After all, leaving the comforts of home would be a real violation of our cultures’ infatuation with shoving old people to the sidelines where they can contend themselves with shuffleboard. By our standard Abraham should have said “No” to the Maker of Heaven and Earth. “I have a tee-time,” he should have muttered. But God would have had nothing to do with such a response. As it was, Abraham “went” (Gen. 12:4).

And off he went into a risky and challenging season of life. Genesis 12:10 tells us that Abraham stepped from the comforts of home in Haran to a drought that was dominating the land of Canaan, his new home. Like many of us he then had family troubles with which to deal, namely, a selfish nephew who was too willing to take the best of the land while leaving Abraham with the leftovers. Genesis 14:1 and following tells us that Abraham then had to go and bail his nephew out of a serious dilemma with some very rough hoodlums in the regional neighborhood. Typical. The kid takes advantage of the older guy, and the older guy still has to go and bail him out!

But the process of rescuing Lot from the regional riff-raff earned for Abraham a significant following. He gained a reputation as a man of humility and righteousness and greatness, someone who could be counted on for justice and stability. In a world where he could have settled for the tombstone that has etched on it, “I played shuffleboard,” he found himself perfectly situated for the tombstone that could say, “I have made a difference in the lives of others.” No small wonder that four thousand years later we sing songs about the man. Father Abraham, had many sons, many sons had Father Abraham. . . .

Which tombstone do you want? Whether you are fifteen or forty-two or eight-six, which tombstone would you want to have resting heavily on the pile of dirt covering your casket?

There is a helpful principle here that may be worth taking hold of, what I call the Abraham Principle: despite our real or perceived limitations regarding age or health or social status or family dynamics, God can accomplish really big things in our lives, even if we don’t understand the gravity of their significance, even in the face of our sin and failures, taking the impossibilities and turning them into possibilities, faithful to his undying promises, and stetching us to new heights of maturity.

But this principle only becomes applicable when we, despite it all, step out in obedient faith, even if our society might not approve.