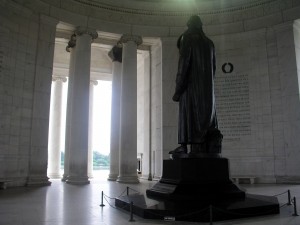 Russell Moore, president of the Ethics and Religious Liberty Commission of the Southern Baptist Convention, offers a compelling argument for the kind of man or woman Christians should vote for in the upcoming presidential election. “Echoing [Thomas] Jefferson on religious liberty will have more appeal than proving you know all the hymns,” he writes.

How true, and to understand why perhaps taking in some of Moore’s comments, published in The Wall Street Journal, will be helpful:

Thomas Jefferson wouldn’t make it as a Sunday school teacher in a Baptist church. We don’t tend to recruit those who would cut apart a Bible to get rid of miracles and resurrections—for us the best parts—to instruct our children. Yet the same Baptists and other evangelicals who wouldn’t have let Jefferson near their baptismal pools were willing to check his name for president of the United States because he was willing to stand up for religious freedom.

That’s why the most important test of 2016 may be the Thomas Jefferson Primary —the race to see which candidates offer a clear, coherent vision of religious liberty when the very idea is contested in American politics.

Jefferson won over the Baptists and evangelicals without pretending to be one of them. After all, he was derided as an infidel by his critics. Jefferson and the Baptists came to religious liberty from two very different starting points. He based it on an Enlightenment understanding of natural rights. They based it on a gospel in which consciences must be free if they are to stand in judgment on the Last Day. The Founding-era evangelicals, such as fiery Virginia Baptist revivalist John Leland, didn’t care about motives, but about who would work to secure freedom. That’s a good model for the next election.

In recent years candidates have assumed that they can win over evangelicals by learning Christian slogans, by masking political rallies as prayer meetings, and by basically producing a long-form new birth certificate to prove they’ve been born again. This sort of identity politics is a luxury of a past era when evangelicals were part of a silent majority in the U.S., with our First Amendment freedoms assumed and guaranteed. That is not the present situation.

To read Moore’s entire article, click here. Or . . . still better, study well the candidates that arise, and vote only for the one who genuinely celebrates religious liberty. Too much is at stake to settle for anything or anyone less.