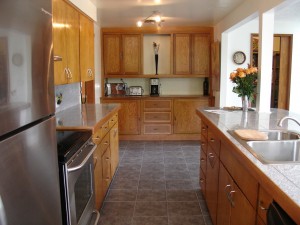 There are two ways of influencing a situation that tend to dominate the leadership landscape. One is to manage the moment. This is when the person in authority recognizes the need for change and pursues a safer course toward transformation, putting into motion the manipulation of tasks or systems or behavior for an immediate effect. In general the burden of responsibility rests upon the authority figure, who, having managed the moment toward his or her goal by simply giving directives, can now pleasantly testify to having achieved the longed-for results. This, frankly, requires little vision on anyone’s part, and I have referenced it as a “safer course” because it is inherently risk-averse. The child or the spouse or the employee or the athlete or the student or the soldier just needs to do what was asked, manipulate the behavior or system, offer a hearty “Yes Sir,” and all is well. This is the scenario that can unfold when my wife says to me, “Would you load the dishwasher?” It is sort of a command, cloaked as a simple question, designed to achieve an immediate goal, in a context requiring little or no real thought or effort other than a polite “Yes Ma’am.”

But what if she invited me to envision a kitchen that sparkled, and empowered me to process what that could look like and then make it happen? And what if she added to such an invitation the strategic notion that a kitchen that regularly shined would be consistently inviting for our family, it would give us a quick and comfortable place to immediately accomodate any guest who happens along, it would inspire our family toward more general tidiness all the way around, and evoke for us the idea of shalom because we could enter it without the tension of, “Wow, this place is a disaster”? What might such processing do for me? It would be messier because then I am forced to come up with solutions. It might take longer because there is a huge difference between a tidy kitchen and a loaded dishwasher. It might look differently than she would actually prefer, which could set up awkwardness between us as we seek common ground.

Yet it might also condition me toward greater personal confidence and an expanded vision for what the physical nerve-center of our home could be. I could own more fully the strategic value of the kitchen, and cultivate a passion beyond a clean countertop toward margin for the souls of my children and guests and bride. I could learn something about risk and potential disagreement and disappointment because, for instance, where I would place the concrete-like fruit basket might be very different than where my bride would place it. The effect might be that the hands-on authority figure for our nest—my beautiful wife Christa—would have not merely managed a moment where systems and behavior are tackled for some immediate gain. The effect might be that she would have contributed to the development of . . . well . . . an idea, a culture, and ultimately, a man.

And therein is the contrast between two ways of influence. One manages the moment, focusing on systems and tasks for rather immediate results. The other makes a man (or a woman or a child), with the results coming much more slowly. The management approach is about pushing buttons. The empowerment approach is about building a person. This is why we do not do a blanket curfew for our girls, but take the time to evaluate every situation. “Be in a eleven” would be so much simpler. But “Let’s talk through the details of this evening,” though it takes more time, conditions our girls to think on their own and participate in a self-discovery process. They get to speak into the goal, and this empowers them to learn how to handle on their own and in community still greater goals. It is the same theory as the good coach who declares, “Winning games is great but it is not what I am ultimately about. I’m not here to merely develop a good player; I’m here to make a man who wins the game of life.”

Every leader, whether a mom or a coach or a business executive or a teacher or a union boss or a president, can manage a moment for some immediate result. The surface goal might be achieved and the leader can then declare victory. But at what cost? Perhaps that the people around him have not been empowered to own something, engage in self-discovery, and generally shape their future and the future of the community of which they are a vital part. Crafting a person, though more difficult and slower and often messier, is better for everyone.