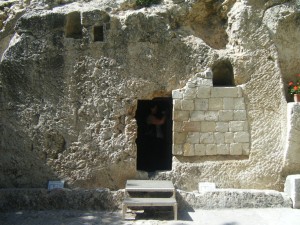 John 20:11-18 tells the story of Mary Magdalene who, upon discovering the empty tomb, is unsure of what has happened and is clearly panicked by the idea that the Lord has been “taken away” (John 20:13). First she must deal with Jesus’ death, and now the possibility that someone has stolen his body, perhaps as some cheap stunt. Whatever hope she had placed in Jesus seems to be vanishing, her tears telling a story of despair. At that very moment of profound uncertainty her heart and mind must surely be wondering if Jesus had in fact risen from the dead, just as he had said he would (see Matthew 20:17-19), or if perhaps . . . Jesus was something less than everything for which she had hoped.

If Jesus had not risen from the dead then there are a handful of serious implications with which we must deal. Consider these that follow:

First, if Jesus did not rise from the dead then Jesus is a liar, for he had clearly stated he would do so. Matthew 16:21, 17:23, and 20:19 find Jesus making it very plain that he anticipated rising from the dead following his humiliation and execution. He is specific enough to declare it would be the “third day” (cp. Matt. 20:19). If he did not rise from the dead then he is a fraud; therefore, not doing “all things well” (cp. Mark 7:37) as the crowds claim. For ages even non-believers have acknowledged that Jesus is “good.” But a good man does not lie. He cannot be both a deceiver and good.

Secondly, if Jesus did not rise from the dead then he is not God-in-the-flesh as he has stated in the gospel narratives of the New Testament (see John 10:30, for instance). And if he is not God-incarnate then he has no real authority or power over our lives, and is therefore not worthy of our allegiance. John 10:17-18 reminds us that Jesus’ power from above allows him to give life. Either he has such power . . . or he does not.

Thirdly, if Jesus did not rise from the dead then we have no real hope for the future. First Corinthians 15:17-18 declares, “And if Christ has not been raised, your faith if futile and you are still in your sins. Then those who have fallen asleep in Christ (that is, died) have perished.” The anticipation of forgiveness, of honor, of power, of peace, or reconciliation to our Creator, etc., evaporates. We are left with nothing.

Fourthly, if Jesus did not rise from the dead then many throughout the ages have risked their lives in vain. The early followers of Christ declared themselves to be “witnesses” (see Acts 2:32) to his resurrection, and many of them went on and were martyred for their allegiance to Jesus. If Jesus did not actually rise, however, then they sacrificed their lives for no reason.

Lastly, if Jesus did not rise from the dead then all of Christianity is a house of cards—a farce. After all, everything we believe hinges upon his resurrection.

However . . . if Jesus rose from the dead then, simply put, we must deal with him on his terms, knowing he is the embodiment of truth, he is Almighty God who has arrived on the scene, he gives meaning and hope to our lives, he merits our total surrender—even unto death, and we have a sure taste of reality.

And then we must respond with the determination and delight of Mary Magdalene, as recorded in John 20:16, when the resurrected Jesus did in fact approach her: Rabboni!, which means, “My Master!”

“Write This Down” is a summary of select teaching moments offered by Pastor Matthew. The preceding summary is from “If Jesus Did Not Rise . . .”, an Easter Sunday message, presented on the weekend of March 31, 2013, at Bethel Church.

If I find myself agreeing with a quotation until I see who said it, I might not be the truth-seeker I think I am.