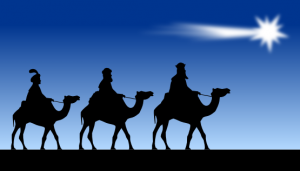 Matthew 2:1-12 paints a compelling portrayal of bravery and determination, unpacking for all the story of magi who make their way toward Bethlehem from some distant land in the east. Contrary to conventional thinking, and the accompanying legends and carols, the magi likely many long months or perhaps even a year or so after Jesus’ birth, and were most likely from among an intellectual-, artistic-, philosopher-class (as opposed to royalty, contrary to the great carol “We Three Kings”) influenced centuries before by the prophet Daniel and shaped by rich Old Testament passages like Numbers 24:17. Here are some of the lessons one can learn from their fascinating journey:

First, they approached their experience with intentionality and resolve. We cannot appreciate the determination with which they stepped out of their comfortable Persian confines to journey across the Fertile Crescent toward the foreign land whose capital was Jerusalem. Think of the questions from friends and family and colleagues who undoubtedly thought the magi had lost their minds. But they went with an unwavering focus on the one born the King of the Jews.

Secondly, and tightly connected to their proactivity and resolve, they demonstrated a great measure of courage, particularly when standing before King Herod. In effect they communicated to King Herod, “We’re here to worship the one born King of the Jews, and you are not him!” And this was on the heels of an arduous trek across one of the most dangerous highways in the world with no small amount of treasure in their bags. The days were long, the land was brutally hot, their were, one imagines, bands of robbers and thieves along the way, and then, once in Jerusalem, they had to contend with the skepticism and insecurity of the Jewish establishment.

Thirdly, their journey reminds us that knowledge about God is radically different than relationally knowing God. It is obvious that the wise men could have remained in that land from which they came. They could have said to themselves, “We know a child-king has been born west of us,” and then merely inserted that in a journal and called it good; one more piece of knowledge among thousands of data-points. But for them knowledge wasn’t enough—they had to meet him. They had to lay their eyes upon him and bow their knees to him.

Of course, King Herod and all of his theologians and other advisors evidently knew something about the child as well. When the magi asked they were able to  find the prophecies about him, such as Micah 5:2. They seemed to understand that this child-king was the Messiah. And yet, despite this knowledge one notices a profound lack of interest in Jesus, other than fearing he might be a threat. Knowledge of him is radically different than relationship with him.

A final item worth noting is that worship of the Christ-child was the paramount concern of the wise men. Nothing is heard from them about what they hoped to gain from Jesus. It’s not like they were going on this journey to take from him, to learn from him, to use him. They simply desired to worship him. They wanted to pay him homage, bend their knees, and acknowledge him as one worthy of their time, their talent and their treasure—indeed, their very lives.

These are important values for us to live out long after the wrapping paper is tossed in the rubbish bin and the ornaments are boxed up. When we take hold of these four lessons we see the spirit of Christmas made manifest in our lives through every season, every day of the year, and not just the busy days of December.