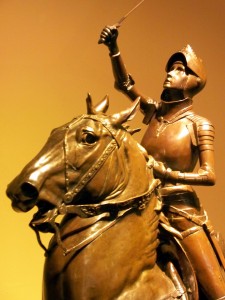 Perhaps it’s because I have daughters of my own, and a wife who is beyond amazing. I suppose I don’t really know why, but for some reason I am really drawn to that biblical character named Abigail, the wife of Nabal, a rich land-owner from Maon, “whose business was in Carmel” (1 Samuel 25:3). Were she a man I would easily refer to her as a total stud, a knight in shining armor, or perhaps a sage.

But she’s not a man. She’s a woman, and one of the most courageous and compelling characters in the Bible. And frankly, for women like Abigail accolades are hard to come by. They are too special to be reduced to silly names like stud or quaint titles like sage. They deserve better. Words are simply not to be found.

Now some women will read that and say something to the effect of “Why do you seem surprised that a woman could be so compelling and courageous?” I do understand that question, but I want you to know that I’m not suprised at all by Abigail’s character. The key women in my life are extremely strong and courageous and compelling characters—people that I admire deeply and learn from every single day. In fact, I’m not sure I’d know what to do with women who are not cut of the cloth from which Abigail comes. The reason Abigail stands out is not because she surprises me, but because she foils our culture’s view of women. The so-called open-minded elite in our society view women as weaklings whose only road to true enlightenment is through sexual expression and something the elite call “choice” which, of course, is really no choice at all but unbelievable pressure to have an abortion or find their identity outside of the home or what-have-you. Indeed, when women do seem to assert themselves in ways that break from this norm they get ridiculed and demeaned. The supposedly enlightened statements within the progressive public square about female empowerment simply don’t square with reality. It’s all talk and no action. In the end, our culture remains deeply threatened by, well, the Abigails of the world.

Which then begs the question: just who is Abigail? And the answer can be reduced in part to this: Abigail is a valiant woman who stood tall among a world of fools, chief of whom was her husband Nabal, whose very name in the Hebrew language means Fool, but also included in this is the renegade named David—he who would one day become king of Israel—because of his easily-offended and impetuous spirit.

You can read the account of her world in 1 Samuel 25. It’s really quite amazing. A handful of elements stand out to me when reading through the passage. One is that yet again a woman has to stand tall and clean up the mess of men. This seems to be a recurring theme embedded within human history (And don’t tell me that Eve started it! Adam should have manned-up and protected his bride from the serpent!). Millions of women ranging from Joan of Arc to Joan the married mother of three who lives on Maple Drive and who has a husband who looks at porn are forced to step in where others should have led. It’s one of the burdens of the Fall. Many women don’t rise to the need. But many do. In fact, too many have too.

Another element that stands out to me is that Abigail cast a vision when the guys were simply casting stones at one another. 1 Samuel 25:31 finds Abigail confronting David as he traveled headlong to butcher Nabal. “[M]y lord shall have no cause of grief or pangs of conscience for having shed blood without cause or for my lord taking vengeance himself,” she offered, if David would relent and not take his anger out on Nabal because of Nabal’s unkindness to David and his men. In a world of people living for themselves, Abigail selflessly painted a picture of a better future. Thankfully, David listened to her.

One more item that leaps out to me is that Abigail let the Lord vindicate her, and this really sets her apart. She spoke truth to David when she found him coming to kill off her family. She rallied her servants to serve David and his men rather than ignore them as had her husband. She even communicated to Nabal just what she had done, lest she be perceived as deceptive. And in the end the Lord vindicated her, liberating her from the foolishness of the world in which she was embedded, and elevating her to a place of prominence within the future Kingdom of Israel.

One of my prayers is that the women in my life would be Abigails in a world of fools. If you’re a man let me invite you to pray for that too, and even encourage that within the important women who surround you. And if you are a woman, all I have to say is “Go for it!” Stand tall as a beloved daughter of King Jesus, clothed with strength and dignity (Proverbs 31:25), and “not afraid” (Proverbs 31:21).