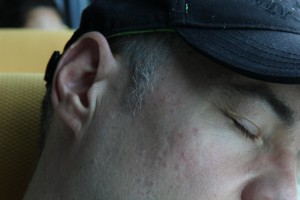 Mark 7:31-37 offers a striking moment in which to grapple with some important values for every disciple of Jesus. To begin with, consider the story, as told from Mark’s perspective:

Then he returned from the region of Tyre and went through Sidon to the Sea of Galilee, in the region of the Decapolis. And they brought to him a man who was deaf and had a speech impediment, and they begged him to lay his hand on him. And taking him aside from the crowd privately, he put his fingers into his ears, and after spitting touched his tongue. And looking up to heaven, he sighed and said to him, “Ephphatha,” that is, “Be opened.” And his ears were opened, his tongue was released, and he spoke plainly. And Jesus charged them to tell no one. But the more he charged them, the more zealously they proclaimed it. And they were astonished beyond measure, saying, “He has done all things well. He even makes the deaf hear and the mute speak.”

The region in which Jesus had this interaction with the deaf and mute man was the Gentile area situated to the southeast of the Sea of Galilee. That Jesus was so readily available to the Gentile people, which was a significant departure from the norms of the Jews, and particularly a Jewish rabbi like himself, says something about his incredible love and willingness to represent his Father’s beating heart for the world (cp. John 3:16). That he was so personal and intentional with this broken man, serves as a great role model for all of us who follow Jesus. Think about the following values that surface in this most unique interplay:

First, Jesus was available. Availability is a value that ought to mark every disciple of Jesus. Much like Isaiah the Prophet, who when God asked whom he might send out, declared, “Here am I! Send me” (see Isaiah 6:8), so we followers of Jesus ought to have a “Here am I, send me!” perspective on life. Jesus certainly did. When the man was brought to Jesus he readily helped. There was nothing about Jesus that suggested he was troubled or bothered. He was on mission, and he gave himself fully to the man.

Which brings us to the second value. Jesus was intensely personal with the man. One cannot help but note the degree to which Jesus got into the man’s personal space. He was undoubtedly nose to nose with the man, his fingers went into the man’s ears, he spit onto his own hand and then touched the man’s tongue. The man likely felt Jesus’ breath as he deeply sighed and looked to Heaven. Such personal interaction highlights Jesus’ willingness to move beyond himself, his own comfort zone, his own agenda. He was clearly over himself and willing to take a risk and engage a broken man on an intensely personal, even intimate (I know men don’t like that idea) level. As a disciple of Jesus I have to ask myself to what extent I am willing to get over myself and move toward the brokenness of another.

And this leads to the third value, which is that such a movement might prove messy.  Am I willing to get messy in my available and personal connection with another in the name of Jesus? Think about it—fingers in his ears; spittle on his hand; hand on his tongue; breathing in the stale breath and soaking in the undoubtedly unkempt appearance of an ostracized man. There is nothing particularly neat and tidy about Jesus engaging this man. And very often when we express the love of Jesus Christ to those around us, there is little that is comfortable or neat about it. People are messy. Are we willing to get over ourselves and invade their space anyway?

To do so means to be deliberate, yet another value for any disciple. This word seems harder and stronger than the more cliché words like “intentional” or “proactive,” needful as those words are. It suggests that as a disciple I am willing and eager to actually initiate the opportunity, responding fervently to those moments God brings into my life, those people he brings across my pathway. Passivity is not allowed in the life of the disciple of Jesus.

One last word. These few values are shaped by love—love that is found in God, given by God, defining my identity, and, therefore, spilling out into the environment and lives around me (see 1 John 3:16).

Can you love in the manner in which Jesus did? If you will, then you are embodying the heart and soul of one of his disciples. Anything less is, well, less.

“Write This Down” is a summary of select teaching moments offered by Pastor Matthew. The preceding material is from the message “Values for the Disciple,” part two of the sermon series entitled, “Signs,” a study through the Gospel of Mark, presented on the weekend of February 2, 2014, at Bethel Church.