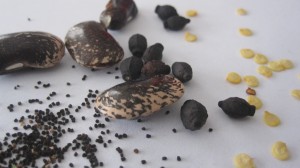 With the turn of the page the reader of Mark’s gospel turns from a captivating introduction to Jesus’ remarkable life, toward a more narrow focus on a ministry that revolutionizes the world, but not easily, not comfortably, and not without serious conflict. Chapter four of Mark’s gospel is an important pivot point, one that begs for our attention.

It begins with one of the most important parables Jesus spoke—the Parable of the Sower. Read it carefully:

[quote]And he was teaching them many things in parables, and in his teaching he said to them: “Listen! Behold, a sower went out to sow. And as he sowed, some seed fell along the path, and the birds came and devoured it. Other seed fell on rocky ground, where it did not have much soil, and immediately it sprang up, since it had no depth of soil. And when the sun rose, it was scorched, and since it had no root, it withered away. Other seed fell among thorns, and the thorns grew up and choked it, and it yielded no grain. And other seeds fell into good soil and produced grain, growing up and increasing and yielding thirtyfold and sixtyfold and a hundredfold.” And he said, “He who has ears to hear, let him hear.” (Mark 4:2-9 ESV)[/quote]

One might wonder why Jesus begins here. But remembering the challenges he has already faced, the accusations of being in league with Satan (see Mark 3:22 and following), the issues relating to discipleship and the cost of celebrating God’s kingdom (see Mark 1:14-20 or 3:31-35), and the fact that with him a new day has come (see, for instance, his time spent with the “sinners” in Mark 2:13 and following),  it begins to make sense. We must pay careful attention; we must “Listen!” A sower has come, and he is scattering seed all over the place. There are challenges, obstacles and risks. Relative to what is scattered the return is small. But it is clearly important.

Broadly speaking there are two elements of the parable that call for our interest. One element is about the sower; the other about the soils. Let’s first consider the sower, where it would appear that Jesus is referring to himself. A couple of things are worth mentioning here. First, it is clear this sower is willing to throw seed into the most unintuitive places—gr0und that is hard, ground that is rocky, and ground that is thorny. Of course, there is also the rich soil on which he throws the seed, but 3/4 of what he tosses out lands where you and I might think it should not. Secondly, it would appear that the sower is perfectly content with this seemingly dubious effort. Perhaps an explanation about the parable would help:

[quote]The sower sows the word. And these are the ones along the path, where the word is sown: when they hear, Satan immediately comes and takes away the word that is sown in them. And these are the ones sown on rocky ground: the ones who, when they hear the word, immediately receive it with joy. And they have no root in themselves, but endure for a while; then, when tribulation or persecution arises on account of the word, immediately they fall away. And others are the ones sown among thorns. They are those who hear the word, but the cares of the world and the deceitfulness of riches and the desires for other things enter in and choke the word, and it proves unfruitful. But those that were sown on the good soil are the ones who hear the word and accept it and bear fruit, thirtyfold and sixtyfold and a hundredfold.” (Mark 4:14-20 ESV)[/quote]

The sower is sowing “the word” of God. This word may most generally reference God’s revealed purposes in time and space; the narrative of the Kingdom. In Mark 1:14-15 Jesus makes it clear that he has come “into Galilee, proclaiming the gospel of God.” He did not suggest he would only proclaim it to the best people or the weakest or the most interested. He simply said he would proclaim it. There is a commanding generalization about that, as if his part is to proclaim and it is up to other forces to manage the reception. Now, this observation is very important. The sower must be content with that intentionality and perceived waste. He can only sow. This is true when the sower is Jesus. And it is true when the sower is you or I, faithfully following our Lord’s call to represent him.

“Write This Down” is a summary of select teaching moments offered by Pastor Matthew. The preceding material is from the message “The Sower & the Soils”,  part one of the sermon series entitled, “Piercing the Darkness,” presented on the weekend of September 22, 2013, at Bethel Church.