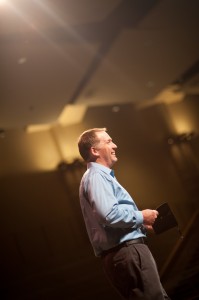 Preaching is among the sublimest gifts of life, for in it the written Word of God comes alive for the hearer, and the Spirit of God uses such a hearing to direct the soul of a man or woman right to the very foot of the Throne. Preaching can never be taken lightly within the Church or beyond. Though the Almighty could have chosen ten thousand other vehicles by which to promote His revelation, He chose preaching. Whether an ancient prophet like Isaiah or a sage like Chyrsostom or a pastor like Spurgeon, the verbal expression of God’s Word is something very important to our Lord.

People ask me all the time about my own preaching. Several things give it shape. One was growing up in a church that never taught the Word. Listening to the pastor of our childhood church was like spending an afternoon perusing Readers’ Digest; interesting tidbits could be found amidst the verbal pages, but most of it was superficial and without purpose. I remember thinking at the time that if I were ever to preach, which at the time seemed utterly absurd to me, that I wanted to share from within the Scriptures, and I wanted it to be captivating.

Another thing that shaped me was spending my college years preaching to multitudes of tiny churches scattered throughout the Appalachian Mountains. These little churches–mostly Presbyterian–had no pastors, so for a few bucks a weekend I would be invited to come and fill the pulpit. My very first sermon was an almost complete recitation of R. C. Sproul’s sermon from Isaiah 6 that I had heard him give at a Ligonier Conference in 1989. Indeed, Sproul is a huge inspiration to me. But I figured out that most of the people at these mountain churches, educated and experienced in their very own ways, were not ready to go as deeply as Sproul might. In fact, though there were exceptions, many knew so little about the Word, that a simpler approach was required. It was in this precious environment that I discerned that there is a real need to bring balance between depth and simplicity. Striving for that balance is very difficult; very subjective, both to me and the hearer. If ever my preaching is criticized, that subjectivity makes it to be along this line right here.

For instance, on any given Sunday I will have someone comment that my sermons are utterly superficial and without direction; nothing but stories and, well, nothing. Oddly, on that same Sunday people will say to me that the sermon changed their lives, that they’ve never been so challenged and the God’s Word has come alive to them for the very first time. For the life of me I do not understand why and how it is that there can be such a divergence of experience regarding one sermon, other than the aforementioned subjectivity. And interestingly enough, even the sermons that I preach that I don’t like, for whatever reason that may be, turn out to be among the most well-received by the people listening.

People ask me a lot about my style. To me context is absolutely everything, and I have to admit I tend to belabor contextual matters with the text because I believe that if I can put the person right in the middle of the action–right at the Mount of Olives or the boat at sea or the Throne of God–then they can experience the moment within the text far more effectively than if I downplay the contextual details. I want them to see what is going on, to smell the sweat and hear the flies and feel the dirt beneath their feet. Besides, by communicating the contextual pieces, for instance, that Jesus would sit when He taught because that is what rabbis did in ancient times, or that the storms over Galilee’s Sea often began because of the wind that would blow in from the southwest off of the Mediterranean Sea, then people find answers to intuitive questions about why this thing or that within the Scriptures. It makes it more real and sensible. It empowers them to know more about the passage. And to want to know more. In my mind this is part of the whole process of what the scholars call exegesis. It is withdrawing out from the text those things that illuminate the substance and meaning and purpose and application of the text. And in the end, it is this substance and application that is essential, substance and application rooted in an understandable view of the passage. Indeed, I have been under the conviction for years that if the preacher offers no applicational points, then the preacher has essentially failed at his task (that is for another discussion, however, for there are many that believe it is the Holy Spirit’s job alone to offer application, and that the preacher needs to avoid such things).

Of course, people also inquire frequently about why I don’t use any notes when I preach. Do I memorize the sermons? Absolutely not. I’m not smart enough to do that, and don’t have the time or patience. I will say two things here. First, my seminary experience, coupled with those years in the mountains, conditioned me to never use notes when preaching. Secondly, if I were to use notes I’d totally shut down. In fact I joke that the only time I’ll ever use notes in public speaking is at a wedding, because I’m far more afraid of the bride and her mother than I am of God.

The fact is I don’t memorize at all. I just spend hour after hour, day after day, throughout each week mentally and spiritually chewing on the ideas, the applicational points, the exegetical insights, and the theology of a given passage. It is like walking around a kitchen counter at a party, when the counter is covered with finger foods and you just constantly graze over what is there, eating morsel after morsel until you can’t eat one more thing, but doing so very subconsciously. Somewhere along this continuum of reflection and prayer, I spend time studying the Greek or the Hebrew that serves as the foundational piece to the English text. I evaluate any theological points, read what others have written about the passage, research applicational approaches to the text, and spend a lot of time praying about how it could be best absorbed by the majority of the people sitting in a very diverse audience, whether in the auditorium on Sunday morning or on the radio broadcast or the Internet. For whatever it is worth, this process is one of the most fulfilling things in my life; one of my greatest joys.

One last thing. That diveristy thing is huge, and this takes us back to things mentioned at the beginning of this post. We have a couple of thousand people that might be present on a Sunday morning, plus thousands of others that tune into our radio broadcast each week. I get emails from around the world from those who listen on the Internet. And every one is very different, economically, intellectually, experientially, spiritualy, socially, age-wise, et cetera. There is no way the preacher can satisfy every one, and so what he must do is be certain he is satisfying just one, and that is the Master, the Lord Jesus Christ. And I have found that when I seek to satisfy only Him, then multitudes regardless of their diversities are impacted. And if they are not, as long as I am being faithful, and short of my own profound obstinance before the Lord, then that is for the Lord to deal with and not me.

Isaiah 51:16 says, “And I have put my words in your mouth and covered you in the shadow of my hand. . . .” Also, Isaiah 50:4 echoes well my own soul and my calling: “The Lord GOD has given me the tongue of those who are taught, that I may know how to sustain with a word him who is weary. Morning by morning he awakens; he awakens my ear to hear as those who are taught.”