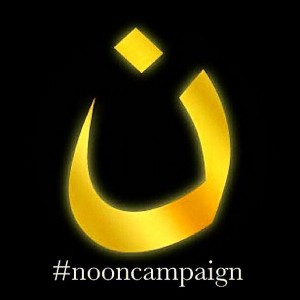 I had hardly returned home last week from southern Africa when I was greeted with texts and Facebook messages and emails and pleading eyes asking about my thoughts on ISIS and the slaughter of the Christians in Iraq. Where does one begin? Let me start with prayer.

On Sunday we invited our church family, and any others who are interested, to leap into a prayer effort called #nooncampaign. This is a play on words. The Arabic letter “n” is pronounced “noon.” This is the letter that is being spay painted on the homes and shops of Christians targeted by ISIS for harassment at least and death at most. It stems from the first letter in the word “Nazarene,” which, of course, refers to Jesus of Nazareth. We have asked our church family and others to pray everyday at noon (1200), in whatever time zone people are in when noon comes, all over the world. We have asked people to pray that the God of the angel armies would surround the Christians being hunted down and persecuted and killed. And not just the Christians—other minorities as well. Whomever ISIS is seeking to marginalize and slaughter, we are praying for their safety and for ISIS’s swift defeat. So . . . join in! Pray at noon for the Christians and others being persecuted in Iraq (and anywhere else, for that matter). It takes but a moment, but imagine if thousands are joining their voices before God for such a cause. He will be moved.

I know Samaritan’s Purse has a response plan for what is happening in Iraq, and I would trust them about as much as anyone in the world to be reliable and focused and helpful during a crisis of this magnitude. You might consider supporting their effort by clicking here. And then there is what might seem controversial to you, but I personally endorse this—strongly, in fact. It is time for the United States and any allies to greatly ramp up an effort to destroy ISIS. Consider this request as put together by leaders from a variety of different religous and political backgrounds, highlighted at www.iraqrescue.org. Read this one quote from their official statement:

We call upon President Obama and the Congress of the United States to expand airstrikes against ISIS/ISIL with a view to eroding its military power, and to provide full air support for Kurdish and other forces fighting against ISIS/ISIL. Further, we endorse the Washington Post’s call for the United States to provide arms, ammunition, and equipment to Kurdish forces, Sunni tribesmen, and others who are currently hampered in their ability to fight ISIS/ISIL by a lack of sophisticated weapons and other resources. The U.S. should also assist with intelligence. We are hopeful that local forces, with adequate support and assistance from the U.S. and the international community, can defeat ISIS/ISIL.

Let me encourage you to go to the Iraq Rescue website and sign the petition. ISIS is without a doubt a psychopathic force of evil that our world has not seen in a long time. Their atrocities demand a response.

Pray. Give. Petition. You and I cannot be there in person to help. But perhaps these three things will get us there in spirit, tangibly empowering those who are suffering to receive justice and care, and those who are brutal to be swiftly shut down.