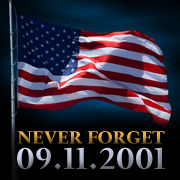 In the language of the ancient Hebrews there is a word that invites all who hear it to intentionally, sensitively and with a sense of sacredness memorialize some moment or event or person that is worthy of recollection. It is the word zakar, and it is a word that has been on my mind a lot of late as I anticipate the tenth anniversary of 9/11. The most common way of translating the word is simply “remember,” and passages where one can see the word in context include Genesis 40:23, wherein a particular servant of Pharaoh king of Egypt did not “remember” to acknowledge a man who had significantly helped him, or Psalm 143:5, wherein the psalmist determines to “remember the days of old,” and then goes on to say he wishes to “meditate” on all of God’s works, seemingly making “remember” and “meditate” very close cousins.

Remember . . . meditate . . . not forgetting. It seems like yesterday that I was watching the Twin Towers fall to the ground, muttering “O my God” repeatedly with Christa at my side, gazing in utter disbelief and horror at the CBS broadcast. I recall in minute detail the moments prior to my arrival home, when I had been on horseback with a friend, riding around his sprawling ranch, only to return to my pick up truck and to a cell phone that was worn out with unattended calls from my wife and an FM radio station that was sputtering incoherently about towers and planes and the president—one moment apparent innocence and peace; the next moment . . . terror.

Throughout the years since those awful hours the number of friends who have fought in Afghanistan or Iraq or some other rugged corner of Earth is long. I remember sitting for hours on a flight from Frankfurt back to the United States as a young soldier described in detail to me two tours in Iraq and one in Afghanistan, mingling his colorful stories with tears and anger. Just because I listened attentively and prayed for the soldier, prayed about the unraveling marriage to which he was returning and the kid he has never seen, and prayed with him about the nightmares that kept him from rest, he pulled out a bottle of wine freshly purchased in Frankfurt and insisted I take it. He was so grateful to finally vent, even with a caring stranger.

I remember sitting in some airport at some particular gate somewhere in the recent years, Denver I think it was, as about a dozen or more soldiers were saying their good-byes to their wives and moms and little boys and girls. There wasn’t a dry eye in the entire gate. It was awful. But I remember being so proud.

I remember the frantic search I made at convenience stores around El Reno, Oklahoma, just a day after 9/11, for that American Flag decal that would fit just right in the rear windshield on my Oldsmobile Cutlass. I remember desperately taking both of our vehicles to the gas station an hour or two after the towers fell just to top them off with fuel because word was spreading rapidly that gas prices were going to skyrocket throughout the afternoon.

I remember the speech before a joint session of Congress on September 20, 2001, when President George W. Bush showed in his hands the police badge of a man named George Howard, a police officer who was killed in the Towers as he was trying to save the lives of others. I remember crying like a baby as he held it up. I remember thinking that I wanted to sign up and go fight someone, anyone, whatever it took to make things right.

I remember watching Saving Private Ryan the day it was released, three years prior to 9/11, with my dear friend Greg Baldwin at my side, walking out of the theater, musing with him about whether or not America would ever again be in conflict of the magnitude portrayed in the movie. Who knew? I couldn’t help but think about that simple conversation the afternoon following the collapse of the towers.

I remember my friend Mary Reuter, a lovely woman seasoned by a good long life, telling me on the evening of 9/11, as our church family gathered to pray, that 9/11 was our generation’s Pearl Harbor. “You will always remember,” she said.

I remember lying in bed the night of 9/11, holding my beautiful Christa, both of us knowing nothing would ever be the same. And I remember many moments throughout the years since wondering if others would still remember. Or would we just move on, conning ourselves back into complacency, telling ourselves that the collapse of the Twin Towers or the strike at the Pentagon or the hole in that Pennsylvania field was nothing more than furious flashes through some teenager’s video game.

And now here we are, eleven years later. I simply cannot believe it has been that long.