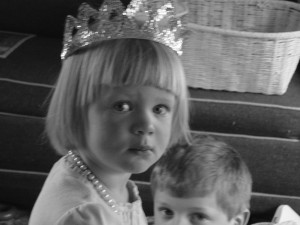 This time of year the headlines are full of familiar references to churches and those who claim to follow Christ. There will be stories about “pilgrims” making their way to Bethlehem, the “faithful” flocking into the Vatican, and “believers” gathering for Christmas Eve in churches aplenty. Within the musty corridors of numerous tiny churches scattered all over the nation there will be hearty hugs followed by words like “brother” or “sister.” There will be sermons referencing the “sheep” or “flock,” and many a Christmas card will talk about “wise men” still seeking Jesus.

The list of names and characterizations of Christians can be long. Most of them are accurate in their own oft-metaphorical way, and nearly all of them add color to what could be an otherwise bland phrase like “church-goer.” But there are a couple of words that you will likely never hear but which are every bit as accurate and compelling. To discover those words we have to peer deeply into the unfolding drama of Luke 1. Consider how the English Standard Version relates the matter in Luke 1:5-17:

In the days of Herod, king of Judea, there was a priest named Zechariah, of the division of Abijah. And he had a wife from the daughters of Aaron, and her name was Elizabeth. And they were both righteous before God, walking blamelessly in all the commandments and statutes of the Lord. But they had no child, because Elizabeth was barren, and both were advanced in years.

Now while he was serving as priest before God when his division was on duty, according to the custom of the priesthood, he was chosen by lot to enter the temple of the Lord and burn incense. And the whole multitude of the people were praying outside at the hour of incense. And there appeared to him an angel of the Lord standing on the right side of the altar of incense. And Zechariah was troubled when he saw him, and fear fell upon him. But the angel said to him, “Do not be afraid, Zechariah, for your prayer has been heard, and your wife Elizabeth will bear you a son, and you shall call his name John. And you will have joy and gladness, and many will rejoice at his birth, for he will be great before the Lord. And he must not drink wine or strong drink, and he will be filled with the Holy Spirit, even from his mother’s womb. And he will turn many of the children of Israel to the Lord their God, and he will go before him in the spirit and power of Elijah, to turn the hearts of the fathers to the children, and the disobedient to the wisdom of the just, to make ready for the Lord a people prepared.”

As you can see from the details given by Luke, Zechariah was a rather faithful priest fulfilling a particular responsibility in the great temple in Jerusalem when an angel of the Lord appeared to him with a most unusual and important message. This message—a prophecy regarding the birth of John the Baptist—clearly startled Zechariah, provoking him to understandable fear. The story goes on to tell us about Zechariah’s skepticism about how such a prophecy could even come about, largely because of his and Elizabeth’s great age. As we read further into Luke, we see, however, that God did in fact bring to fruition his promise, little John was born, and the rest is history.

But embedded within the storyline is a vital hint toward how our God sees us who believe in him. Yes we are part of his flock and we are brothers and sisters and we are pilgrims in a weary land. But we are something far more that that as well. Let us look again at the last line from the passage above, Luke 1:17. It tell us that among other things John the Baptist will “make ready for the Lord a people prepared.” What does that mean?

In the ancient days the phrase “make ready” was a common term used to describe the effort put forward by servants to clear a roadway for approaching royalty. Now, surely the phrase can be simpler than that. Surely it can simply allude to clearing a pathway; a rather mundane and seemingly neutral idea. And  yet it is used regarding John the Baptist in the Gospels of Matthew and Mark for the heralding of the one who is born “king of the Jews” (Matt. 2:2). In Luke it is noteworthy that while John the Baptist will be going before the Lord in the spirit and power of one of the ancient prophets (Elijah), it will be not to “prepare the way for the Lord” (Matt. 3:3) but to “make ready for the Lord a people” (Luke 1:17). Both “prepare” and “make ready” reflect the same Greek word, which is hetoimazō, meaning to make ready or prepare, particularly the leveling of a roadway for an approaching monarch. If John the Baptist’s responsibility includes leveling the roadway for the approach of God’s people (note from Luke 1:17 the phrase “for the Lord a people prepared”), and if we accept the idea that these language often alludes to the dignifying of royalty, then what are the implications of that for how we understand the nature and dignity of God’s people? They are not just sheep and pilgrims and servants and followers. Can they not also be kings and queens?

This makes still more sense when we consider important passages such as 2 Timothy 2:12 and Revelation 5:10, both of which imply that followers of Christ will reign with him over a kingdom. And if we in fact can be seen as royal ones who will “also reign with him” (2 Tim. 2:12), then what does that mean for how you see yourself? Can you look in the mirror and know that in Christ Jesus you are not a mere has-been who should be ashamed but a king or a queen, dignified and called to rule alongside the Son of God? If you can think of yourself that way, what does that mean for how you speak, how you think, the things you feed your mind, and so forth? As a king and queen you have a special kind of worth, a unique kind of dignity; you are precious and a treasure, worthy of the Lord’s deep delight. When was the last time you thought of yourself that way?

And what are the implications for how you deal with people around you? For those who are in Christ, they are also kings and queens, called into a kingdom that they share with you. Do you regard them as such, even if the way the live their lives leaves you frustrated? And how could this way of thinking shape how you deal with those who are not believers, but whose lives could be transformed by the gospel of Christ—those future kings and queens?

This Christmas it may not be enough for you to remember the little baby born as the King of the Jews. Take time to embrace the idea that in Christ Jesus you too are a king or a queen. And with that is not only great status, but joy.

**********
“Write This Down” is a summary of select teaching moments offered by Pastor Matthew. The preceding summary is from the message “Make Way for the Kings and Queens,” a Christmas message, presented on the weekend of December 23, 2012, at Bethel Church.