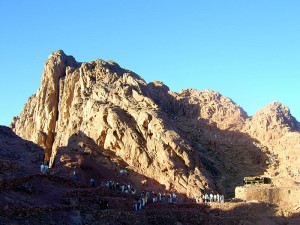 The Apostle Paul can almost see it happening. There, in the soft glow of lanterns and torches, pious men teach in sanctimonious tones to men and women scattered on blankets and rugs, a room full of people eager to ensure that they are okay with God. “What does the law of God tell us?” those gathered ask the teachers, and the teachers, anxious to pour their poison into the thirsty crowd, proceed to answer.

“Well,” they offer, “you must be circumcized, even as Gentiles. And you must dress a certain way. And you can no longer associate with, well, those that aren’t like us.”

“And you must abide by the strict diet of our ancient fathers. And you must remember the high holy days, whether they be weekly or those scattered throughout the year.” On the pious teachers went, offering their version of how to be right with God, communicating that our own efforts and expectations are essential to demonstrating a life worthy of God’s mercy. Somehow, with every single piece of advice, the cross of Christ got smaller and smaller.

No small wonder then that the Apostle Paul, who likely taught about Jesus in the very room where years later the pious teachers lectured, sought to fight fire with fire. The forked-tongued lecturers of legalism might be employing the ancient law of Moses to shore up their arguments, but two could play that game. Thus, Paul, in his winsome and wise way, offers up a story so commonly known by the Jewish people, and probably heard by the Gentile Christians, that everyone’s ears would perk up. And he begins his written response to the aforementioned scenario this way: Tell me, you who desire to be under the law, do you not listen to the law? For it is written. . . .

And then he shares: Abraham had two sons, one by a slave woman and one by a free woman. But the son of the slave was born according to the flesh, while the son of the free woman was born through promise. Now this may be interpreted allegorically: these women are two covenants. One is from Mount Sinai, bearing children for slavery; she is Hagar. Now Hagar is Mount Sinai in Arabia; she corresponds to the present Jerusalem, for she is in slavery with her children. But the Jerusalem above is free, and she is our mother (see Galatians 4:21-26).

Paul offers two competing life-realities. The first is the reality of enslavement, epitomized by the ancient woman named Hagar, the great matriarch Sarah’s slave. When Sarah could not get pregnant she sought to take matters in her own hands and offered her slave to Abraham in the hopes that Sarah’s slave might give Abraham an heir. Paul says that Hagar “corresponds” to Mount Sinai (where the Old Testament Law was presented) as well as the Jerusalem of Paul’s day (which was under the heavy sandal of Rome as well as the heavy scowl of the Jewish religious elite). Hagar’s son Ishmael, born naturally and through man-made scheming or invention, is analous to the spiritual legalist who lives life wringing hands over sin-management and works-oriented religion.

The second reality is that of promise, epitomized by the matriarch Sarah’s ultimate pregnancy, giving way to the birth of her and Abraham’s son Isaac. Isaac was not only the son of the promise that God made to Abraham (see Genesis 15:4), but came about through God’s miraculous provision, for Sarah was well beyond the natural ability to produce a child. This “God-made” scenario in Sarah’s life is akin to the “Jerusalem above” that is “free,” a heavenly realm wherein our relationship with God is shaped by his grace alone. Isaac was born not because Sarah had the natural capacity, but because God simply provided—it was divine intervention. Sarah, along with Abraham, merely received the blessing by faith.

Having offered up these two competing realities, both straight from the very law that the Galatian legalists were employing for their own gain, Paul then adds the following powerful declaration for his Galatian Christian friends: Now you, brothers, like Isaac, are children of promise. But just as at that time he who was born according to the flesh (Ishmael; see Genesis 21:9) persecuted him who was born according to the Spirit, so also it is now. But what does the Scripture say? “Cast out the slave woman and her son, for the son of the slave woman shall not inherit with the son of the free woman.” (Galatians 4:28-30).

For Paul the need for his Galatian friends, in the face of the pressure put upon them to find their spiritual assurance in works and not grace, was to “cast out” the legalists and their petty notions, much like Hagar and Ishmael were cast out of Abraham’s house because of Ishmael’s persecution of Isaac. The son of the slave was harassing the son of promise, and Abraham and Sarah determined to do something about it.

Paul’s exhortation is that his Galatian friends—and, indeed, all of us—who are pressured to conform to the self-proclaimed spiritual masters of our lives, do something about it. After all, as Paul pens in Galatians 4:31, we who believe in Christ are not children of the slave but of the free woman.

[For insight on how we “call out” legalism, click here]

“Write This Down” is a summary of select teaching moments offered by Pastor Matthew. The preceding summary is from the message “Divine Intervention or Man’s Invention,” part of the sermon series “Galatians: No Other Gospel,” presented on the weekend of June 10, 2012, at Bethel Church.