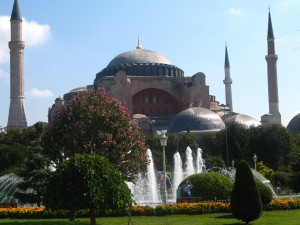 CNN has just posted a breaking news story about the Turkish government now confronting anti-government protestors with tear-gas and water cannons. While these protestors are supposedly frustrated by the islamification of what they would like to see remain a generally secular society, rumor has it that the real force behind the protestors are the Iranians, eager to destabilize Turkey and bring it more fully into its orbit. I suppose we will simply have to wait and see. If Egypt is any model, the so-called democratic process brought on by thousands of protestors will actually give way to a hardline Islamist dictatorship.

If this happens it will then resolve a unique tension for the student of the Bible who is peering ever-so-thoughtfully into Ezekiel 38-39 and wondering if the events in the Middle East—Iranian nukes and Syrian civil war and Iran’s arming of many anti-Israel factions, etc.—is a set-up for the Gog and Magog clash with Israel. Turkey, a NATO nation and traditional ally to the western bloc, has commonly been considered to be Gomer (see Ezekiel 38:6). But its alliance with the western societies has made it difficult to shoehorn it into the Gog-Magog coalition referenced in Ezekiel 38.

If a Muslim Brotherhood-type movement prevails, perhaps as a result of the protests taking place right now, and similar to the same movements that took place in other Arab nations over the past couple of years, then Turkey would fit well as a viable ally to Iran, Syria, Egypt, Sudan, Libya, and, of course, Russia, who is working feverishly to not only strengthen its military presence in the Mediterranean Sea while attempting to gain United Nations permission to place “peace-keeper” troops on the Golan Heights separating Israel and Syria (cp. Ezekiel 39:2). These nations are the modern-day rendition of the Gog-Magog coalition prophesied in Ezekiel.