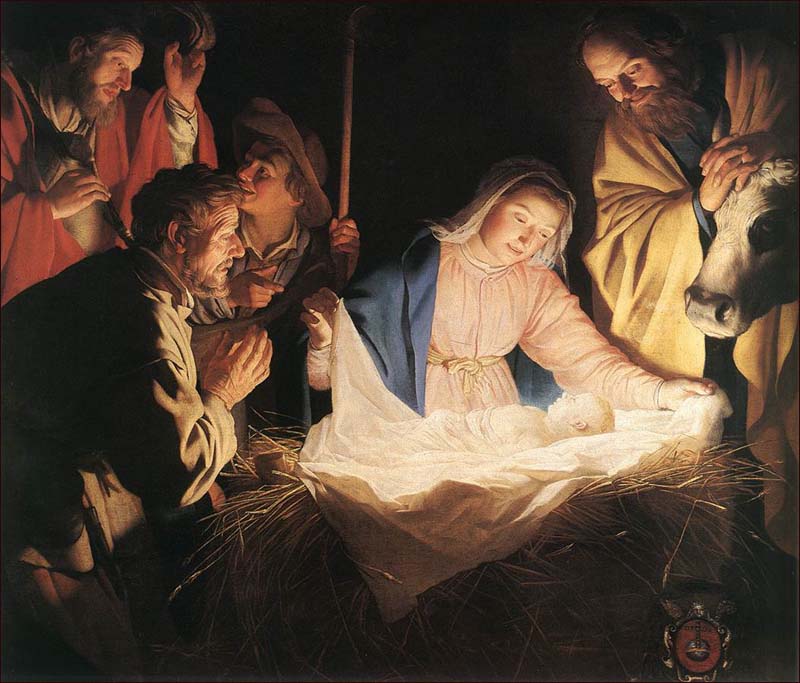 When the rough and tumble shepherds gathered into the rustic stable Joseph hardly knew what to do. No doubt, fear gripped him as they assembled around the little boy in the manger. Mary—startled from her much needed sleep by the commotion—looked up with bewilderment.

What do these men want?

With an agility that seemed contrary to their rugged ways, the shepherds knelt down before the little boy. No one dared to touch him, and they hardly said a word. They just stared, filled with wonder at the newborn baby. What a scene! Here are these rugged shepherds approaching a newborn baby with the care and tenderness of a big sister awestruck by the arrival of a sibling. Since Luke records this tender, brief scene, one can presume that it had a tremendous impact on young Mary.

But she wasn’t the only one impacted, for it wasn’t long before the crowds in Bethlehem made their way to the stable. Word had spread. The shepherds couldn’t contain themselves. And now, the town wanted in on the event.

While Mary and Joseph cautiously observed the throng of people that stopped by, glanced in, and nodded politely, they heard all kinds of amazing things.

Angels had been seen in the fields.

The shepherds said that Messiah has arrived.

A Savior has been born.

Yes, these were amazing things! That the people were so intrigued by this newborn baby demonstrates clearly that they felt a terrible need for something more than what they had. When people start bragging about angels and peace and joy and hope, it is because they recognize spiritual things as something greatly needed in their own ordinary and empty lives. The people of Bethlehem had certainly been waiting for Messiah, if for no other reason than that they were desperate for something in which to hope.

That is why Jesus’ arrival was so important. God Almighty was preparing to fulfill His long-standing promise to redeem humanity from its own awful devices and sin. God was moving, and Jesus was the center of all of that movement. It was not a coincidence that the angel—while interrupting the shepherds’ quiet evening—spoke of a Savior.

A Savior has been born.

Indeed, the Savior has been born. God has arrived—cloaked in human flesh and crying like a baby and in need of a diaper. But what better way to get the attention of a culture so saturated with the spectacular? Anything else would have elevated God and His purposes for humanity to the stratosphere of the trivial—another shiny program among a plethora of ideas. And if that happened the upper crust might have gotten wind of it and a few zealots might have become interested for a season and the common people would have heard about it but not cared. After all, it would have been something for everyone else.

No . . . this really touched a chord. And while it certainly blew some categories (the Creator of the universe becoming an infant of the created?), it was authentic from the start. And it fit all that the prophets of old had foretold.

Consider Jacob’s words in the book of Genesis 49:10: The scepter will not depart from Judah, nor the ruler’s staff from between his feet, until he comes to whom it belongs.

Or how about David’s proclamation in Psalm 68: Our God is a God who saves; from the Sovereign Lord comes escape from death.

And, of course, are Isaiah’s words in the ninth chapter of his magnificent book: For to us a child is born, to us a son is given…and he will be called Wonderful Counselor, Mighty God, Everlasting Father, Prince of Peace.

Could it be that when Mary pondered all that was transpiring around her, these words echoed in her mind? Were these ancient expectations recorded in God’s love letter to humanity familiar to her as she listened to the shepherds tell their story?

Well, if they weren’t then, they surely would be as the years unfolded. “What would these next days be like?” she certainly would have asked herself. And who could blame her? And though we have the benefit of looking back at those days following Jesus’ miraculous birth, we still ask the same thing.

What will these next days be like? Can Jesus impact us just as He did young Mary or the rugged shepherds or the watchful people of Bethlehem? Can He affect us as He did that pious priestly couple from Judea’s hills?

There is no doubt that He can. It is simply that—like those rough-hewn shepherds—we must bow humbly before Him and let Him turn our lives into something pliable.

Will you do that right now?