Here is a very hard word of truth: life is not about you. Or me. There are things going on that are far greater. Lest you wonder, check out the following account from Mark 6:45 and following:

[quote]Immediately he made his disciples get into the boat and go before him to the other side, to Bethsaida, while he dismissed the crowd. And after he had taken leave of them, he went up on the mountain to pray. And when evening came, the boat was out on the sea, and he was alone on the land. And he saw that they were making headway painfully, for the wind was against them. And about the fourth watch of the night he came to them, walking on the sea. He meant to pass by them, but when they saw him walking on the sea they thought it was a ghost, and cried out, for they all saw him and were terrified. But immediately he spoke to them and said, “Take heart; it is I. Do not be afraid.” And he got into the boat with them, and the wind ceased. And they were utterly astounded, for they did not understand about the loaves, but their hearts were hardened.[/quote]

Thousands upon thousands of men, women and children had just been fed by Jesus. The crowds were beside themselves with excitement. John 6:15 is especially helpful in drawing out a key detail about the entire scenario, suggesting that the crowds, because of Jesus’ benevolence, desired to force him into being their king. Such a move would have been a marvelous diversion from the divine plan. No cross to worry about; no suffering to endure. One can imagine the great temptation this might have been. “You can be king without all that drama,” Satan no doubt whispered. 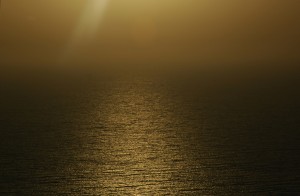 But Jesus would not give in to such pressure. Rather, he demanded his disciples flee the scene by boat, while he fled the scene into the mountains to pray.

My suspicion is Jesus went to the mountainside to do two very important things: first, to confirm his Father’s mission in his life, and, secondly, to affirm his Father’s greatness above all things. These two things, when said and done, may well be the essence of all prayer. In light of the pressure upon him, conversing with his Father about these things was a necessity. So they are for you and me!

Meanwhile, the disciples are making their way across the water, and one might imagine how their journey began. They surely had heard the crowd’s desire. They, too, saw the miracle of the loaves, and this following what for them had been a significant time of personal ministry (see Mark 6:7-13). They are riding the wave of Jesus’ popularity, perhaps determining amongst themselves who will enjoy what powerful post in a Jesus-led empire. When their own hunger and the pressing needs of the crowd was inconvenient, they were miserable. When the applause came because of Jesus’ miraculous care, they were interested. They were, in short, generally self-absorbed, and their hearts were calloused (the word for “hardened” in 6:52 means “calloused”) toward Jesus’ real mission.

And so Jesus sought to redirect their thinking.

As the evening progressed the elements on the lake became fierce. The wind and the waves were tossing the disciples about, and they were striving painfully and slowly across the water. Stretched to their limits, one might imagine their frustration. Shouldn’t things be easier for such as they, serving as they are beside the most popular figure in the land? Longing to redirect their thinking, and simply be with them, for a good teacher desires to always be shaping and molding his disciples, Jesus walks out on the water toward them. They have reduced Jesus to being the potential new leader of an empire in which they will  have key posts; Jesus wants to elevate their estimation of him.

Mark, in recording this historic moment, offers at least two powerful glimpses toward Jesus’ complete deity. First, he talks of Jesus meaning to pass by the disciples. With this language Jesus echoed the way God passed by Moses and displayed his glory (see Exodus 33:19) when God and the Israelites were together in the wilderness centuries earlier. That moment between God and Moses was huge for solidifying Moses’ calling as God’s servant before the mighty hordes of wandering (and watching) Jews. Moses would not forget that God was God and that Moses was subordinate to him. The second glimpse is similar, and also involves an allusion to God and Moses. By using the phrase “it is I,” Jesus echoed God’s self-disclosure as the “I AM WHO I AM” as recorded in
Exodus 3:14. The same wording is used, and was understood by the Jewish people as a reference to God’s declaration of who he is. Throw in one more powerful glimpse of deity, the stilling (yet again) of the wind and the waves, which echoes God’s work in stilling storms (see Psalm 107:29), and the evidence for Jesus’ disclosure as being God is overwhelming.

Which brings us back to the disciples, and to you and me who claim to follow Jesus Christ. Life is not about them or us. We can spin dreams all day long of our own grandeur, come up with no end of possibilities regarding our own greatness, and posture for power and position, but in the end we cannot hold a candle to the magnificence or the mission of Jesus Christ. [Tweet “Life is not about us, but about him.”] The reason the disciples’ hearts were hardened is because they had convinced themselves that they were far more important than they really were. When our hearts are hardened—when my heart is hardened—it is often for the same reason.

And so sometimes my King Jesus has to orchestrate circumstances to remind me of what is true about me—and what is not.

That is what a great disciple-maker does.

“Write This Down” is a summary of select teaching moments offered by Pastor Matthew. The preceding material is from the message “Wind and Waves,” part seven of the sermon series entitled, “Piercing the Darkness,” presented on the weekend of November 17, 2013, at Bethel Church.